With ice and glaciers melting across the Arctic, at least this one polar bear found a 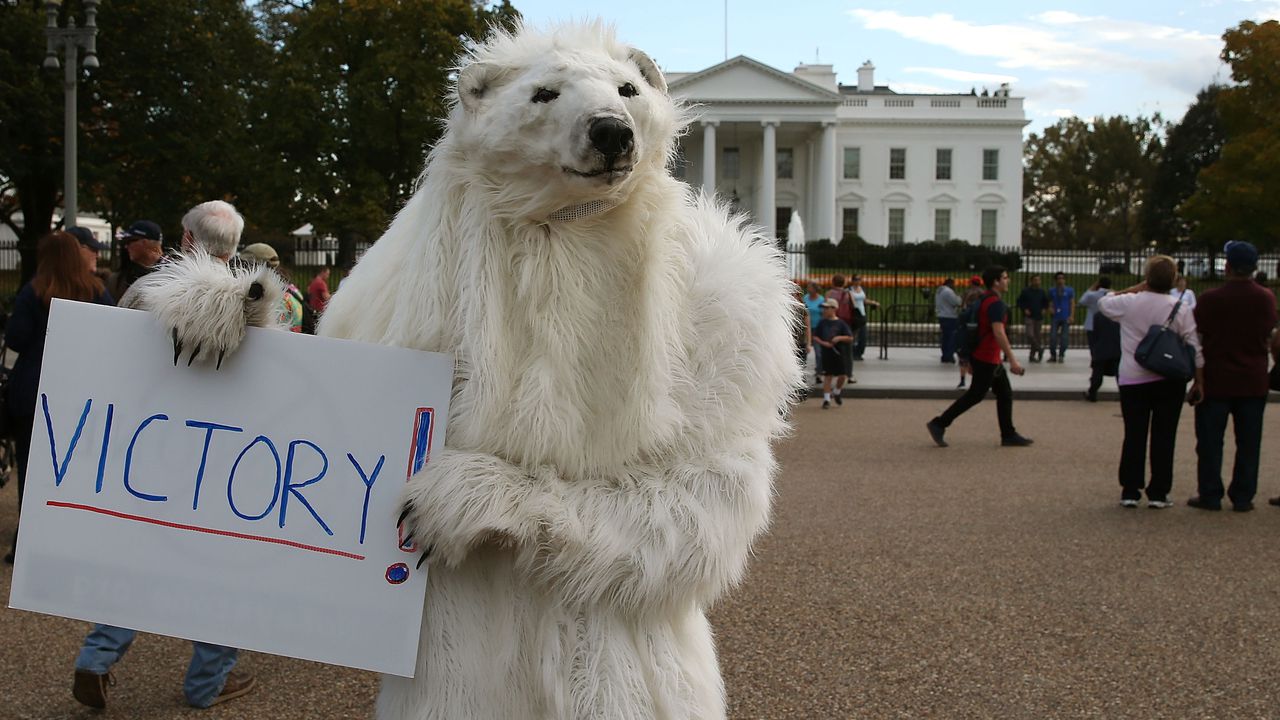 comfortable place to rest on Pennsylvania Avenue. (Not really, that’s an activist in costume….)

Last November, President Obama (finally) announced a decision on the proposed Keystone XL Pipeline, which would have connected Tar Sands in Alberta to refineries in the United States.  It was no, and it was a long time in coming.  The pipeline, first proposed roughly a decade ago, had been opposed by activists almost immediately.

Advocates on both sides inflated the importance of the issue, and environmental activists made stopping Keystone the keystone of a political strategy.  Climate change activists focused on Keystone, arguing that the health of the earth was best served by keeping a particularly dirty crude oil in the ground, and moving more quickly to different sources of energy. But most analysts said the practical impact of the pipeline on the production of greenhouse gases would be small. Activists along the route protested about the environmental fallout and disruption of largescale construction.

Refiners and producers supported the pipeline, which would speed the transport of energy to the United States. It would, they said, create thousands–even tens of thousands–of jobs. After construction, other analysts said, 50 might be a better estimate.

But the focus on Keystone was good for climate change activists, and writer and organizer Bill McKibben and 350.org realized this early on. While global climate change, international treaties, and long and complicated environmental processes are hard for most of us to get a handle on, new construction is tangible and seemingly tractable. Keystone became the non-negotiable demand around which all kinds of activists and 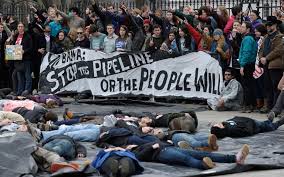 campaign could unite. Activists lobbied on Capitol Hill and campuses, and protested along the proposed route and outside the White House. Leaders of environmental groups and celebrity activists got arrested, protesting Keystone, and scientist James Hansen made it a central point in his own campaigning.

Because the pipeline crossed national boundaries, the US State Department had the responsibility of weighing in, and it took years to complete a review. President Obama repeatedly delayed making a decision, trying to keep Keystone from becoming an election issue in 2012, and his opponents kept returning to it, using the delay as an opportunity to make their case, that the president’s environmental concerns were damaging the economy.

While Obama stalled, the world changed. Oil got cheaper, as did solar panels, the environmental movement got stronger. He waited to decide whether to take an umbrella to work until the rain had slowed to a trickle.

I don’t know if anyone thought Obama could delay a decision all the way up to 2015, after the price of oil had fallen, and after demand for the Tar Sands oils had cratered, but he did. The economics of the new pipeline were so unfavorable by November 2015, that approval would probably not have spurred drilling and construction anyway. The company behind the pipeline, Transcanada, appealed for a delay, when its circumstances and its markets might be more favorable–and someone else might be president.

When President Obama finally announced his decision, he emphasized that Keystone itself was not that important–to the economy or the environment–except as a symbol. Rejecting Keystone, he said, was a way for the United States to demonstrate international leadership on the issue.

Activists claimed victory, even acknowledging that some circumstances beyond their control, like the effect of increased fracking on bringing down energy costs, helped their case on the pipeline. They also emphasized how much more there was to do. (See McKibben’s comment on the victory in The New Yorker.)

At this point, it’s clear that keying on the pipeline was smart politics for the movement. It made the issue of climate change concrete. It was stoppable, a clear focus, and with obvious targets for influence and protest, and the prospects of political accountability. There may have been many projects that would have had a great environmental impact, but it’s hard to find a sharper focal point for organizing.

Today, TransCanada filed a claim against the United States for $15 billion in damages that it suffered by losing the pipeline. Maybe this will resurrect the Alberta Tar Sands as a business prospect or Keystone as an electoral issue–but maybe not.

Victories are always partial and usually contested. Keystone XL provides a clear and unambiguous example of what a win looks like.