A March is not a Movement

Fifteen years after the Million Man March, it’s hard to find any kind of substantial effect.  At The Root, Jon Jeter writes that Black community is more divided than it was in 1995, and that, as a group, Black men are doing worse.  Although he doesn’t provide much in the way of numbers, he could point to unemployment, income, college attendance, and incarceration rates, and make the case in frightful detail.  (Jeter also discussed his column on NPR’s Talk of the Nation.)

In retrospect, the controversies surrounding the Million Man March–and its initiator, Minister Louis Farrakhan, seem ridiculously overblown.  Among other things, Farrakhan preached self-help, and the march ended with a call for Black men to return to their communities and do better.  You could spend a lot of time searching for a political program there, as I–and others did–and not find one.  In a way, the march was a replacement for politics rather than a call to collective action.

Farrakhan’s relations with the political leadership of the black community were erratic at best.  His march was an event, not clearly connected to any kind of political program, nor to any coordinated campaign of collective action before or afterward.

A contrast with the 1963 March on Washington 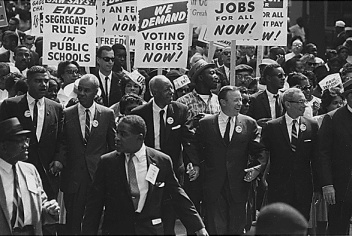 is telling.  The large demonstration, sponsored by several competing organizations, expressed many clear demands on government (you can see some in the photo).  Indeed, the organizers argued about just what those demands would be.  More significantly, the March on Washington was a dramatic punctuation mark in a much longer series of campaigns, including the Montgomery Bus Boycott (started in 1955), the Freedom Rides (of the early 1960s), SNCC’s sit-in campaign, started in 1960, and Freedom Summer (1964).  Other activists lobbied members of Congress, filed lawsuits, and generally mobilized supporters of civil rights across the country.  The large demonstration mattered to the extent it was embedded in something much larger.

But the Million Man March was not unique.  The Promisekeepers, a Christian conservative group, staged a large demonstration on

the National Mall in 1997, calling on men to “stand in the gap,” and provide moral leadership for their families and for their country.  Very much like the Million Man March, men left the event feeling inspired and empowered, and no clear politics emerged.  (To be sure, conservative social movements continued, but the Promisekeepers were not a big part of them.)

So, what are we to make of Glenn Beck’s 9-12 March in August?  Although Beck hasn’t shied from political pronouncements, he has been clear that he is NOT a Tea Partier, and

that his ambitions are different–and broader–than political change.   the 9 principles and 12 values offered as the core of Beck’s campaign embed expressions of limited government in a much larger web of religious and generic patriotic sentiments.  If this is all they do, it’s hard to imagine an impact greater than the Million Man March or the Promisekeepers.