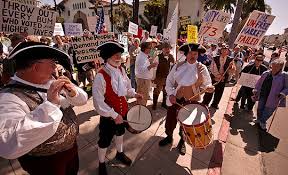 What was the Tea Party anyway?  We remember the costumes, of course, and the upset victories in primary elections by some, uh, unusual candidates, but what was it about?

Like all social movements in America, the Tea Party contains a great diversity of goals, including concerns about the deficit, taxation, intrusive government, (imagined) cuts in Medicare, preserving (or privatizing) social security–and much else.  There is rhetoric about Constitutional government, and some noise about repealing or amending amendments (17th and 14th respectively).  Tea Party activists were united in their opposition to the bank bailouts negotiated by Henry Paulson (under President Bush) and against President Obama’s efforts to reform health care.  There is a great deal of criticism of mainstream politics–and both political parties–and anger that has been harnessed only by Republicans.  Beyond that, however, there are great differences papered over by a shared antipathy to President Obama and the Democratic Congress.

Opposition is a great unifier, but the world is changing.  With Republicans taking control of the House of Representatives, Tea Party activists want to see the politicians they supported try to deliver on some of what they want.  Every initiative, however, risks splitting the Tea Party movement.

In the last week, Freedom Works leader, Dick Armey (former Republican majority leader in the House) has been taken to task by the Tea Party Patriots on immigration.  Armey has argued that the Tea Party should stay away from the divisive issue–for political reasons–and that the United States should find ways to facilitate the movement of labor across borders–for economic reasons.  The Tea Party Patriots, a group that has prioritized grassroots activism, has organized to oppose the DREAM Act. Although activists point to budgetary concerns, this opposition campaign clearly feeds the nativist elements at the grassroots.

This fall’s Tea Party also put social issues on the back burner, keeping the libertarians in line with the social conservatives.  In response to a letter from a conservative gay group (GOProud), conservative activists have reasserted the importance of social issues, particularly opposition to abortion and gay and lesbian rights.  Judson Phillips, leader of Tea Party Nation, has released a letter in response, reminding Republican leaders in Congress that the true conservatives in the Tea Party produced the GOP’s large gains, and questioning the authenticity of GOProud as a Tea Party group altogether.  Phillips laid out an agenda for Congress that included tax and budget cuts, opposition to immigration, and staunch opposition to lifting Don’t Ask, Don’t Tell.

Meanwhile, even repeal of Obama’s health care reforms doesn’t provide the unity of the campaign trail.  NPR’s Julie Rovner reports that the large hospitals, health insurers, and drug companies are reluctant to give up all of the benefits and certainty they negotiated with the Obama administration and the Democratic Congress.  They want adjustments, to be sure, but they don’t want to give up the opportunity to sell insurance and drugs to another 30 million Americans.

The challenges are obvious: Republicans can’t lift and preserve Don’t Ask Don’t Tell, reject and pass the DREAM Act, or limit government while preserving services.  Someone in the Tea Party coalition is going to start counting losses and betrayals.

Author and professor of Sociology and Political Science at the University of California, Irvine
View all posts by David S. Meyer →
This entry was posted in Uncategorized and tagged don't ask don't tell, Dream act, health care, tea party. Bookmark the permalink.