The Constitution and Reading Aloud 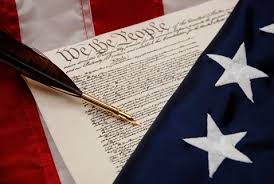 My first grader is starting to get bored of reading aloud in class.  Like most members of Congress, she can read faster than she can listen, and having to slow down as every reader stumbles through the words gets tiresome.  But, in minimal deference to promises to Tea Party groups, the members of the House are devoting a little time to the text.

Of course, members of Congress must have been exposed to the Constitution some time in law school or college or middle-school civics.   Still, going back again to the words can’t be a bad thing.  As a veteran teacher of American government 101, I’m all for it.

Tea Party activists hauled out images of the Constitution to represent an imagined past in which political life is better.  Opening the little document, however, and actually reading the words, is the best way to understand why our political life is the way it i

[Note: The first chapter of The Politics of Protest: Social Movements in America, explains how the US Constitution sets the terrain for protest politics.]

Like most texts (e.g., a prayer, a pledge) imbued with mystical importance, the actual words (of the Constitution, not my book) are less inspiring than the object as an imagined whole. [ “Read it and Weep,” Dahlia Lithwick writes, in a fascinating piece at Slate.]

The Republican leadership has, wisely, decided to read the amended version of the document, omitting the 3/5ths compromise and the mandate to return escaped slaves (obviously, not divinely inspired parts of the original).

Members of Congress jockeyed to get better pieces of the text.  The leadership reserved the 13th amendment, abolishing slavery, for civil rights hero, Rep. John Lewis (Democrat, Georgia), prompting bipartisan applause.  I’d like to think this reflects not only consensual disapproval of slavery 150 years later, but also appreciation for Lewis’s efforts, as activist and legislator, to force the federal government to deliver on the promises of citizenship for all Americans.

During the electoral campaign, Tea Partiers demanded that the Federal government respect the Constitution by avoiding action on anything not specifically mentioned in the Constitution.  They will, no doubt, feel affirmed when they don’t hear mention of health insurance in the Constitution.  Like railroads, abortion, television, nuclear power, and the internet, it escaped the framers’ attention.

The Republicans have promised to legislate only on issues where the Congress has some Constitutional authority.  In real life, this provides virtually no limits.  Back in the days when I taught American government, I would give groups of students a list of potential issues and a copy of Constitution, asking them to find authority.  Even without legal training or familiarity with Justice Marshall’s pronouncements in McCullough v. Maryland or the history of jurisprudence on the commerce clause, they were able to find their way, quickly, to the “necessary and proper” clause of Article I, Section VIII, and the Supremacy clause in Article VI, which afforded the government flexibility to respond to new issues the framers knew they couldn’t imagine.  (Listen to Charles Fried, Solicitor General under Ronald Reagan, rail against the ignorance of those who hope to find protection from health care in the text of the Constitution.)

So, the text of the Constitution doesn’t actually forbid many things Republicans don’t want.  More striking is that many Republican legislators haven’t been warned off from policies that actually violate the plain language of the Constitution.  Even as members read the sacred words on the floor of the House, Rep. Steve King, the incoming chair of the House Judiciary subcommittee on immigration, promised to introduce a bill revoking “birthright citizenship.”

You’ll recall from today’s reading that the 14th amendment to the Constitution states:

Our Constitution, of course, is amendable, but this is a tough road.  Representative King explained that he opted for a statutory approach because it was easier.

So much for Constitutional constraint.

Author and professor of Sociology and Political Science at the University of California, Irvine
View all posts by David S. Meyer →
This entry was posted in Uncategorized and tagged Congress, Constitution, immigration, John Lewis, tea party. Bookmark the permalink.