The new Republican majority in the House of Representatives 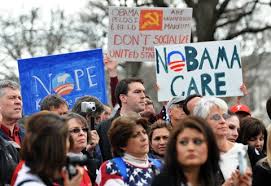 voted to repeal President Obama’s health care reforms, which have just begun to come into effect.  It was a big victory for the Republicans and the Tea Party, but it’s unlikely to move any further through the legislative process.  The Democratic Senate leadership is extremely unlikely to let the bill come to a vote, and President Obama would surely veto it if it somehow did.

The Republican leadership in the House is well aware of this, which made wrangling the votes for a repeal, as a symbolic statement, much easier to do.  It also gives the Republicans an issue for the 2012 elections and delivers something to the Tea Partiers who were so strong in opposition to Obama’s health care policies.

Does it matter?  Sort of, maybe.

Nearly thirty years ago, in 1982 the nuclear freeze movement pushed the Democratic Party to large gains in the House of Representatives, responding to what activists described as President Reagan’s egregious departures from previous mainstream policies on national security.  Reagan had increased military spending dramatically–much of it on big ticket nuclear weapons systems, spoke casually about nuclear wars, and denigrated the arms control process.

[I wrote a dissertation and a book on this.  Alas, you can read much much more.]

The freeze was far more popular than the Tea Party, and much easier to link to concrete policy demands.  A call to end the technological arms race–bilaterally–it consistently polled upwards of 70 percent support among the general public, was the stick activists use to attack President Reagan on defense policy and much else.

The larger Democratic majority in the House passed the nuclear

freeze in May, and the proposal never came close to the floor in the Senate.  [Knowing that this would happen, House Democrats who were dubious about the freeze as policy could vote for it and then vote for contradictory policies.]

President Reagan responded, however, first rhetorically; he learned the sentence, “nuclear war cannot be won and must not be fought,” and delivered it effectively and frequently.  He then sought to reopen arms control negotiations with the Soviet Union.  By the time he ran for reelection in 1984–against nuclear freeze supporter, Walter Mondale, Reagan had become an advocate of arms control and disarmament.  Reagan said that these apparent shifts were actually completely consistent with his long past as a critic of arms control and supporter of nuclear modernization, but this is a hard case to make.  He found a way to change his mind–or to express long-held views that he’d somehow been able to keep well-hidden.

None of it was pretty or neat, but by the middle of the 1980s, both US military spending and the number of nuclear weapons had begun to decline, and in 1989 the world changed forever with the fall of state communism and the Soviet Union.  In effect, the freeze exercised some serious influence, but in ways that were indirect and hard to trace.

Now the question is how much and how seriously President Obama responds to the political pressures of the Tea Party.  There will surely be rounds of amendments to the Health Care bill passed last year.  If Obama follows the Reagan model, he will back away from his reform effort, piece by piece, denying that he is doing so.  This won’t be what the Tea Party wants, but it will be significant.  But Reagan faced far greater pressures from the freeze–and from allied antinuclear movements around the world–than Obama has yet faced from the Tea Party.

There are other possibilities. If Obama is committed, skillful, and lucky, he will use the calls for repeal as excuse to improve the program already passed.  This also won’t be what the Tea Party wants.

Author and professor of Sociology and Political Science at the University of California, Irvine
View all posts by David S. Meyer →
This entry was posted in Uncategorized and tagged health care, nuclear freeze, tea party. Bookmark the permalink.