On Wisconsin and beyond 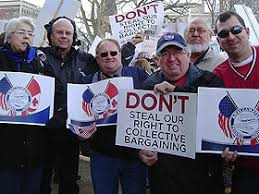 about budgets and labor across the United States.

I’m on the Joy Cardin show on Wisconsin Public Radio, talking about the protests in Madison.  (I got to tell the bagpipes joke.)

It’s about more than collective bargaining in Wisconsin, and the longer the demonstrations go on, the more debate we’ll see on other aspects of Governor Walker’s budget-balancing strategy.  Here’s a hint from an activist in Wisconsin:

But there is a lot of other stuff in the bill that is being completely ignored. It would give the governor the right to kill off Medicaid — a coalition is trying to bring up that issue, but isn’t making it out of the din. Another part of the bill that isn’t being contested is the right of the Governor to sell off state property without taking competitive bids or gaining the approval of the Public Works Commission. And, of course, with so much under attack, nobody is even considering the possibility of improving social services for the most destitute. This year’s deficit could be made up at $32 per adult in the state — it just isn’t that big. But the Republicans are busy cutting revenue via cutting various business taxes.

Clearly, it’s about something bigger than any state’s budget.  Governor Chris Christie says that this is a class struggle: “There can no longer be two classes of citizens: those that receive rich retirement and health benefits, and those that pay for them” (from Politico).  Governor Christie’s solution is to cut retirement and health benefits, forcing the norm downward and playing a politics of resentment.

Democratic state legislators in Indiana have fled to Illinois, where they’ve promised to stay until Governor Mitch Daniels agrees to withdraw a bill limiting union dues.  (Illinois is a big state, but maybe they’ll see the Wisconsin state senators there.)

Several thousand pro-union protesters filled a main hall of the state courthouse in Columbus and gathered in a large crowd outside, chanting “Kill the bill,” waving signs and playing drums and bagpipes. There were no official estimates, but the numbers appeared to be smaller than those in Madison last week. One Democratic state legislator put the figure at 15,000.

(You may remember the “kill the bill” chant from Tea Party protests against health care reform.)

And in Wisconsin, union activists are planning a general strike in the event that Governor Walker signs the anti-union bill.  From the Wisconsin State Journal:

The 97-union South Central Federation of Labor of Wisconsin is laying groundwork for a general strike if Gov. Scott Walker succeeds in enacting legislation that would strip most bargaining rights from most public employee unions.

Federation president Jim Cavanaugh said Tuesday that he couldn’t predict how many unions might take part in a strike, but opposition to Walker has grown rapidly.

“Two weeks ago who would have thought there would have been 70,000 people on the Capitol Square demonstrating on behalf of worker rights?” Cavanaugh said. “We have had an awful lot of statements of support from around the country.”

Whatever happens in Wisconsin, the battles over state budgets have engaged a larger debate about organized labor in the public sector that won’t disappear quickly.  Recognizing what’s at stake, the unions are making serious commitments to take their case public.  And the rest of us are going to be pushed to take sides.  (This is how protest works!)  Here’s Pete Seeger’s version.

Author and professor of Sociology and Political Science at the University of California, Irvine
View all posts by David S. Meyer →
This entry was posted in Uncategorized and tagged general strike, labor, protest, Wisconsin. Bookmark the permalink.