Although those dramatic demonstrations, like the ones we saw in Madison, capture the imagination, by themselves, they won’t change a policy or a government.  Protest signals, supports, and coerces.  Changes in politics and policy depend upon how a broad range of people not protesting respond to those who are out in the streets.

In response to my last post on Madison, about a week ago, olderwoman writes that the Wisconsin 14 (Democratic senators staging a quorum filibuster) would not have fled the capital and the state without the support of a growing protest movement.  She’s right, of course, and has been filing great first-hand reports and analysis on the Wisconsin stand-off on her blog, sociological confessions.  The point is that the demonstrators are responding to, and affecting, the more usual politics in the state.

Governor Scott Walker’s opponents have won a few important victories since I last posted on Madison.  Notably, Governor Walker wanted to clear the capital building of the demonstrators, but the police were slow to do so–and then a Dane County judge ruled that the protesters–like all citizens of Wisconsin–were entitled access to the building.

If you’re following the battle in Wisconsin, you can add the bureaucracy and the judiciary to your scorecard, which should already include the Wisconsin legislature, Governor Walker, organized labor, and the Koch brothers (and their affiliated organizations).

Governor Walker also released his full budget, which featured large cuts in spending and services.  He explicitly challenged the absent senators to return and do their jobs (lose votes), while announcing cuts in spending for poor people (particularly spending for health care), benefit cuts for public workers, and large cuts to public education from K-university.

Predictably, this has strengthened the resolve of the Democrats in the legislature and the demonstrators in the streets (and in the capitol building).  It’s very clear that the conflict isn’t just about workers’ benefits or the budget; Governor Walker is trying to deliver a very different vision of governance in Wisconsin.  To underscore this points, the unions, and the Democratic senators, have offered to sign off on all the financial concessions (which are substantial) in exchange for preserving collective bargaining.  Walker has repeatedly rejected such a bargain.  He has also repeated his intent to order layoffs of public workers if his bill is not passed.

Wisconsin is really a swing state, and the resistant Democrats are likely representing their constituencies as faithfully as the Republicans ready to pass Walker’s budget (maybe moreso, because these are the ones who survived electoral campaigns in a very bad year for Democrats).

Republicans and Democrats have both commenced gathering signatures to recall legislators who aren’t voting the way they want.  Walker, who has been governor for far less than a year, isn’t yet eligible for recall, but many Republican senators, on whose votes he depends, are.  Thus far, reports suggest that the Democrats, supported by organized labor, are doing better at gathering signatures, and a few Republican senators have suggested an openness to compromise.  Today, Republican state senator Rob Cowles (who could be recalled) emphasized the need to compromise (Green Bay Press Gazette):

“You have to be flexible because some way, some how there will be an amendment modifying the collective bargaining,” he said. “It’s an incredible situation (the Democrats leaving) that none of us ever thought would happen. So negotiations on this are critical to move past this and move on to the budget, which also has a number of dilemmas.”

Cowles lamented that collective bargaining has dominated the conversation in Madison and across the state, casting a black cloud over reforms in the 2011-2013 budget bill that seek to balance the state’s $3.6 billion deficit without raiding funds, raising taxes, massive borrowing or questionable accounting practices.

The 14 senators can’t stay away forever. And the demonstrators who have been sleeping out in capitol and continuin 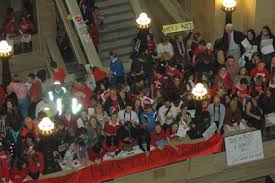 g to assemble on weekends, can’t maintain their numbers indefinitely.  Their success will be dependent upon activating and supporting allies who are carrying their cause indoors.

Author and professor of Sociology and Political Science at the University of California, Irvine
View all posts by David S. Meyer →
This entry was posted in Uncategorized and tagged labor, Madison, protest, Wisconsin. Bookmark the permalink.