Tipping Points and a “No Fly Zone” in Libya

The Arab Spring has played out differently in each country in which it appeared, largely a function of just who is willing to defect 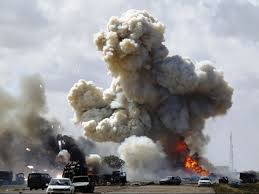 from supporting the regime and throw in with the dissidents.  In Egypt, the military was willing to cut off President Mubarak, such that he really had no viable alternative but leaving power.

When the military moves to opposition side of the see-saw, it makes it safer for others to join in the opposition, and somewhat harder for a more diverse opposition to define consensual objectives.  In any situation, there are some people who are so committed to one position or another that there’s little calculation about what’s most likely or most safe–but in a revolutionary situation, they comprise a small share of those who are active.

Unlike the see-saw, the fulcrum of protest politics can move, and tipping points, as we’ve said, can tip back the other way.

Others make judgments about how safe protest (or support for an embattled regime) is, and how likely political change is.  Every decision can influence the decisions of others: it seems safer to go out into the streets when others are out there; it’s less risky to defect from the regime when you’re not alone–and you think the regime is unlikely to last anyway.  And judgments are subject to revision.

And in Libya: Once a coalition of military powers starts military action, justified with relatively broad and vaguely defined aims, Col. Muammar el-Qaddafi’s political survival appears less and less likely.  Western politicians have been heavy-handed in warning others in the regime that they will face consequences when the regime falls, trying to hasten that process by promoting defection. Words, intelligence, money, and military aid all work to tip the balance.  And, obviously, some things matter more.

Dissidents who were vocal some weeks ago, quieted when Qaddafi’s forces made military gains, but they’re starting to talk again.  Most media reports in the US still disguise the voices of opponents who are interviewed, but that will also change in time, if people become more convinced that Qaddafi will fall.  The military intervention is a heavy thumb on one side of the political balance, and as that balance shifts, more factions will join the regime’s opponents.

At the same time, Qadaffi himself, apparently with few allies in the Arab world and no visible prospects for a safe exit, can see little

choice but to hunker down and make his fall as difficult and costly as possible.  He can end the conflict by leaving power (as Secretary Clinton says), but where can he go?  It’s unlikely that he, unlike President Mubarak, can live out his days in comfort in one of his palaces in Libya.  Somewhere, someone in the opposition is trying to find and sell a safe exit strategy to the dictator, but it’s got to be a tough sell.

Author and professor of Sociology and Political Science at the University of California, Irvine
View all posts by David S. Meyer →
This entry was posted in Uncategorized and tagged Libya, revolution, tipping points, violence. Bookmark the permalink.