Fifty years ago this month, the Freedom Riders put their bodies on the line to test their right to integrated interstate travel and accommodations.

Starting tonight, PBS is running a compelling documentary of the events, featuring interviews with many of the key participants, including heroes and villains.  It’s striking to watch the camera juxtapose interviews of seniors with old stills of their younger selves, changing the world.

We should  all know the  story; it fills a few paragraphs in many public school textbooks.  But seeing the veterans talk about their commitments and their fears produces an appropriately visceral appreciation of their courage.  It reminds us about how much the world has changed–and how much it can still change. 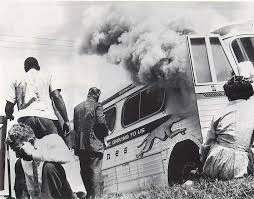 There’s much to think about here.  At the moment I want to raise only the issue of misguided optimism.

The  first Freedom Rides were a controversial tactic within the civil rights  movement, organized by the Congress of Racial Equality, a pacifist group that grew out of the Fellowship of Reconciliation.  The first Freedom Riders thought, mistakenly, that they might be taunted and suffer harassment, but that the most likely outcome was a symbolic demonstration of their right to travel anywhere in the United States.  In interviews, they now say they were unprepared for the extreme beatings, nor did they imagine that Southern whites would set a Greyhound bus on fire while police stood by.

Had the first Freedom Riders known just how dangerous it would be, might they have made another decision? 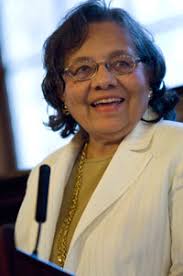 It’s hard not to think of the democracy activists in Tahrir Square, in Tienanmen Square, in the shipyard in Gdansk, and in the prison at Robben Island.  All were unduly optimistic about their prospects of changing the world, and about their personal safety.  Somehow, they continued after they were disabused of this optimism.

Once the first round of Freedom Riders had been badly beaten, taken off the buses, and ultimately sent home, subsequent waves of Freedom Riders followed, the first from Nashville, which had just seen a successful sit-in campaign that desegregated the lunch counters.  The Nashville activists boarded the buses with eyes open, having written their wills the night before.

The civil rights movement united around the Freedom Rides after the tactic had proven much scarier and more dangerous than CORE anticipated–just as other activists had feared.

It’s hard not to wonder how much important history starts with a fundamental miscalculation about personal danger and political efficacy.  Oddly, this courageous optimism can create new possibilities.