“Scarcely any political question arises in the United States that is not resolved, sooner or later, into a judicial question.” This is a tag from 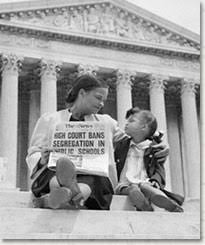 This is only half the story, however, as scarcely any judicial question arises that isn’t, sooner or later, turned into a political question.

Activists on the left and the right are often unduly focused on the courts, generally expecting far too much from judges, and then invariably overly outraged when they’re disappointed.  I think a lot of this has to do with a mythic misunderstanding of the most familiar Supreme Court decision in America, Brown v. Board of Education.

The most appealing way to understand that iconic decision is to see a Supreme Court, led by the politically savvy Earl Warren, recognized a social injustice (racially segregated schools) and an error in Constitutional interpretation (Plessy v. Ferguson), and fixed them both with a unanimous decision.

Activists love that version of the story, because it suggests that justice will prevail, even in the absence of popular support, political resources, or sustained activism.  This is the wrong reading of Brown and the history of segregation in America, and teaches exactly the wrong lessons to activists today.

Today’s lesson is that a judicial decision doesn’t end the political conflict.  (Steve Boutcher and I published this argument in longer form a few years ago.)

This week, courts handed down decisions that pleased and infuriated political activists.

Wisconsin circuit court judge Maryann Sumi struck down the extremely controversial provision in the state’s budget that eliminated almost all collective bargaining in the state.  It wasn’t about the content of the legislation; rather, in the haste to handle a resistant Democratic minority, the legislature’s Republican majority violated Wisconsin’s open meetings laws.  (On the political battle, see earlier entries, including here.)

But that case will percolate up through Wisconsin’s courts to an increasingly politicized state supreme court, which might rule differently.  Even if not, Governor Walker still enjoys substantial majorities in the state legislature–although recall elections are on the horizon–and can pass the bill again.  It’s not that the respite provided by the court doesn’t matter, it’s just that it doesn’t end the larger political battle.

Meanwhile, the United States Supreme Court upheld a provision in a 2007  Arizona law that provides strict penalties for employers found to hire undocumented workers.  They’re required to use E-Verify to vet their workers.  The 5-3 ruling turns on technical assessments of E-Verify’s reliability and interpretations of the text of the Immigration and Reform Control Act of 1986.  On these points, and on many others, the well-educated and well-intentioned Supreme Court justices differ.

This ruling IS NOT about Arizona’s more recent, and even more provocative immigration legislation, nor does it provide a reliable prediction of how the Court will rule on that issue–when it reaches the Court.  The laws are different, and the personnel and politics of the Court could easily be different by the time that case is argued.

Of course, it’s not just the immigration issue percolating up to the Supreme Court.  This week, a federal judge in Virginia ruled that corporations can make direct contributions to political campaigns.  Activists also wait, with a mix of optimism and dread, for cases about same sex marriage and mandatory health insurance to reach the Supreme Court, scrutinizing every sigh in oral argument and looking for signals.

No judicial decision on any of these matters is going to put the issue to rest; rather, it will provide a target and stepping stone for, uh, more politics.  Brown appeared at a relatively early point in the modern civil rights movement’s history–before Rosa Parks refused to move, and lots of contested politics followed.  And lots of schools remained (and remain) essentially segregated, if not by statute.  Nor did Roe v. Wade resolve the issue of abortion rights; it provided a basis for much more litigation, activism, and very polarizing politics–up to, at least, this point, nearly 40 years later.

The savvy activist knows that the judiciary is a place to make claims, and that a decision (good or bad) can be useful in raising money and mobilizing the base.  But it’s only one place.

Author and professor of Sociology and Political Science at the University of California, Irvine
View all posts by David S. Meyer →
This entry was posted in Uncategorized and tagged Arizona, Brown v. Board of Education, courts, immigration, Roe v. Wade, Wisconsin. Bookmark the permalink.