Scott Crow (right), an anarchist who has organized anti-corporate and animal rights events, used the Freedom of Information Act to get his FBI file; he received 440 pages, with much of the material blacked out (NY Times report).

Crow reports being subjected to ongoing surveillance, from both cameras and large men in large air-conditioned cars.  The file also reports that the FBI asked the Internal Revenue Service to investigate Crow’s tax returns, but the IRS said that he earns so little money that it wasn’t appropriate.  (It’s not legal either.)

Domestic surveillance is back!  The Times reports:

Other targets of bureau surveillance, which has been criticized by civil liberties groups and mildly faulted by the Justice Department’s inspector general, have included antiwar activists in Pittsburgh, animal rights advocates in Virginia and liberal Roman Catholics in Nebraska. When such investigations produce no criminal charges, their methods rarely come to light publicly.

In the wake of the September 11 attack on the World Trade Center, Congress rushed to pass the Patriot Act, which allowed the government new liberties in investigating potential threats.  In the public debate, the image of these threats was always young Arab men with Saudi Arabian passports who might fly planes into buildings in pursuit of a divine pay-0ff.

But there aren’t so many such people.  It’s easier to track domestic activists who organize openly–and in English.  Most of the anti-terror action we’ve seen from the US government has been targeted at environmental and animal rights activists.

Scott Crow says that virtually all of the organizing meetings he sets up include police and FBI informants, identifiable because they have obviously eaten more protein and spent more time in the weight room than the other attendees.

The Constitutionality, justice, and wisdom (is this a good way to spend police time and money?) is all subject to question.  I’m interested in what you think; here, however, I just want to talk about how this kind of repression is supposed to work in a liberal democratic country like the United States.

Repression is all about setting boundaries of acceptable political conduct.  In authoritarian states, which use a panoply of tactics to limit activities, assembly, and speech, very little is permitted, and all kinds of people end up sharing common grievances against the government.  That’s why, when such states open up a little, they encounter far more dissent than they imagined.

In liberal democratic states, effective repression targets a narrower band of people, and it’s usually justified in terms of limiting particular tactics (violence!), but Crow’s surveillance suggests that the US government views some ideas as more likely to lead to violence.  This should be scary.

Repression works in the United States when most Americans are convinced that those subject to prosecution are crazy and/or dangerous–that is, not like them.  It’s all about maintaining a border 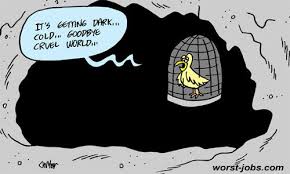 between “radicals” and more mainstream activists who might make more moderate claims more moderately.  In disparaging and distancing themselves from those people, the moderates effectively maintain the boundaries set by the government.  Thus, labor unions and civil rights activists in the 1950s and early 1960s steered clear of people who might have a Communist past, sometimes explicitly and proudly.

Repression falls apart when those moderates become convinced that the targets of government scrutiny aren’t so dangerous or different after all, and make common cause with them, at least in challenging the government.  They like to say that it’s like the canary in the coal mine, the more radical, committed, and sometimes less coherent, are the easier targets for repression, but someone else is always next.

Activists struggle to find ways to protect their own radical flanks, without necessarily throwing in with them.

Author and professor of Sociology and Political Science at the University of California, Irvine
View all posts by David S. Meyer →
This entry was posted in Uncategorized and tagged anarchist, animal rights, coalitions, FBI, Patriot Act, repression, surveillance, terrorism. Bookmark the permalink.