Billionaire Warren Buffett (at right, with ukulele), renowned for his investing acumen, 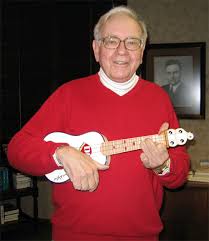 claimed space on the Op-Ed page of the New York Times to call for higher taxes on the superwealthy, like him–and even less wealthy–everyone who earns more than $1 million a year (not so many people).  Buffett says that government is coddling the superwealthy, and it’s completely counterproductive.  He reports that he and his superfriends are doing just fine; they can afford to pay more, and they should.

What’s more, Buffet says, none of the justifications offered by anti-taxers hold true.  He claims that higher tax rates won’t discourage investment or prevent the super-rich from hiring.

Buffett’s piece zinged around the e-world, the subject of news stories, blogs, and thousands of comments.  His proposal was newsworthy not because it was original–many others have made the same arguments, nor because Buffett is smart; plenty of very smart people say the same things.  (Some are, however, professors, argh.)  Instead, Warren Buffett’s call for taxing the superrich made the Times and the blogosphere because it seemed at odds with his interests, at least narrowly as narrowly defined.

The “dissident identity” (the term is from Kelsy Kretschmer, a sociology professor at Southern Illinois University) generates attention because it’s unexpected and seems to have more credibility and resonance than those who take the expected positions.

Social movements love to promote such dissenters.  Peace activists push forward supporters with strong military credentials in the spotlight.  Conservative activist David Horowitz reminds his readers that he was once Maoist, suggesting that his subsequent conversion to right wing politics is all the more meaningful.  Abortion rights activists trot out the Catholics for Choice and anti-abortion advocates promote Feminists for Life, emphasizing the rhetorical power of the dissident identity.  Their critics claim, of course, that those dissidents aren’t real Catholics or real feminists.

But it’s hard to argue that Warren Buffett isn’t a real capitalist.

Of course, he could be wrong on the merits.  But his position doesn’t raise immediate concerns about corruption and dishonesty the way that, for example, Charles and David Koch’s funding of efforts to discredit science on climate change.  The billionaire Koch brothers have large holdings in oil and gas, and regulation to limit greenhouse gases could cost them money.  (They might be right, as well as self-interested, but 99+ percent of scientists working on the issue don’t think so.)

But an op-ed, even from Warren Buffett, doesn’t make a movement.  It is, however, an investable asset, however, as Chuck Collins, at Huffington Post, notes:

We now need ten thousand more like Warren Buffett to speak up, people with incomes over $250,000 that know in their hearts that they should pay more.

Of course, we need an engaged public — people in the bottom 98 percent — to mobilize and press for tax increases on the wealthy before any further budget cuts. But enlisting the voices of wealthy people for the common good is a key part of the strategy to change the political dynamics.

The good news is there are already several thousand who have stepped forward and spoken up. Several hundred business leaders and wealthy individuals have joined Patriotic Millionaires for Fiscal Strength, a joint initiative of the Agenda Project and Wealth for the Common Good. On June 7, the tenth anniversary of the Bush Tax Cuts for the wealthy, they issued a powerful video calling on Congress to let the tax cuts expire.

Chuck, a founder of Wealth for the Common Good, has been working for years to organize and publicize the efforts of the more affluent to promote a more fair and more effective taxation and budgeting.  (Check out his books.)

As the list of “patriotic millionaires” grows, perhaps it will no longer seem dissident when the very rich embrace pay for a government that has served them very well.

Author and professor of Sociology and Political Science at the University of California, Irvine
View all posts by David S. Meyer →
This entry was posted in Uncategorized and tagged dissident identities, taxation, Warren Buffett. Bookmark the permalink.