Occupy Wall Street versus the Tea Party (I)

Perhaps predictably, the comments section of the Washington Post in response to my op-ed has provided a space for typists to rail against me in making their own political points.  The notion that I would dare to compare the Occupiers and the Tea Partiers, particularly, has appalled respondents on the left and right.

Tea Partiers are angry that I would compare a bunch of unwashed and lazy moochers, ready to disrupt and break the law with upstanding employed people who are petitioning, sometimes with their feet, to reign in government.

Sympathizers with the Occupiers report that I don’t understand how the Occupy effort is an effort to build democracy–while the Tea Party is bought and paid for by large money, and is essentially a surrogate for the right wing of the Republican Party.

The protesting people you like are authentic and provoked; those you disagree with are deceived, doing someone else’s bidding (big business or ideologues), stupid, and/or selfish.   It’s too hard to recognize the possibility of sincerity and good will from your political opponents.  (I must confess, however, that I don’t believe that I’m getting flack from both sides means I’m right.)

What’s the same?  Both movements, one well-developed and institutionalizing, another emergent, represent substantial groups of people, angry about governance and the

economy, who’ve taken to the streets as their best hope of effecting influence, taking politics outdoors.  To make an impact, they will have to inspire and/or coerce support from people fully engaged in more institutional politics, where they each have allies.

That said, the differences are significant: Two lines that the editors cut from the Post 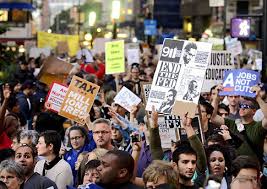 Neither point is as trivial as it might seem.  Tea Party supporters ARE older, whiter, and more affluent than the rest of America.  We don’t have comparable data–yet–from the 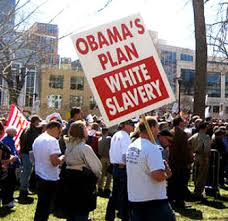 America is changing demographically, something that at least some of the Tea Party is fighting, trying to appeal to an imaginary past, rather than recognizing the world as it is.  The Occupiers are deeply steeped in the travails of the present (see the grievances at we are the 99 percent), and at least some visible portion of those at Wall Street are heavily invested in an imagined (democratic) future that appears utopian.

The inspired visions, of a strict Constitution without the baggage of the real historical Constitution (slavery, for example), or decentralized democracy with grassroots participation and widespread engagement, animate the action–and especially the rhetoric–of many protesters, but movements operate in the present, with extremely pragmatic constraints.  History doesn’t end either way.

With the Republican establishment largely out of power at the outset of the Tea Party, party operatives and organized groups were quick to invest in the emergent Tea Party.  Freedom Works trained organizers across the United States and produced scripts for disrupting the town hall meetings of 2009.  The support of large business interests, most dramatically represented by the billionaire Koch Brothers, provided a deep pocket to invest in one set of ideas and a social movement strategy.  Recall the surge in sales for Saul Alinsky’s Rules for Radicals, as conservative activists promoted the virtues of organizing.

Well-established groups rebranded themselves as Tea Party campaigns to raise money and their public profile.  Sal Russo’s Tea Party Express was a conservative PAC called Our Country Deserves Better; the movement changed the names, but the activity–funneling money into political campaigns–stayed the same.  And national Tea Party groups have been incredibly successful at raising money.

The Tea Party also enjoyed the active support of a segment of mainstream media, most obviously, Fox News, which promoted its events and consistently offered a favorable interpretation of Tea Party activism.  There is no comparable analogue on the left.

I do not mean to suggest there isn’t real grassroots activism out there on the right.  The Tea Party appeals found strong support from frustrated Americans, and the passionate endorsement of a significant minority of Americans.  Real money and organizational skill couldn’t produce a movement without some public resonance, which the Tea Party demonstrated.

Now, however, Tea Party efforts have moved to focus on electoral politics and Washington lobbying–at the expense of the grassroots.  Tea Party Express chair Amy Kremer explained that shift as reflecting the Tea Party’s growing up: “The movement has matured, and we have learned that having a rally, it’s great, it attracts people but it doesn’t affect change just because you’re out on the lawn or 20 days and 20 nights.”

apparent focus the debt and deficit, and channel opposition to taxes and regulation–and not issues many local groups preferred, like immigration, social concerns, or the Federal Reserve.  The battle to define the Tea Party continues, now through the Republican primary season.

Occupy Wall Street came from outside of virtually all of the large left and liberal groups, which were initially wary about offering support–or even publicity.  Only when activists demonstrated the potential appeal and staying power of their effort did larger groups, like Moveon.org and the unions jump on.  The organized groups insist that they don’t want to take over, but rather, to endorse the activists.

The struggle to define the Occupy movement is just beginning.

2 Responses to Occupy Wall Street versus the Tea Party (I)