Starting a large enterprise without having a clear idea of how it could end is risky and dangerous.  (Ask George W. Bush about the wisdom of plotting an exit strategy.)  Now that Occupy Wall Street has succeeded in getting public attention and spurring like-minded 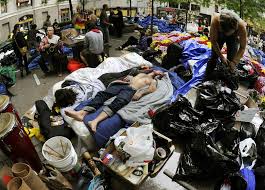 efforts across the country–and maybe the world–activists need to think about how they want to get out of Zuccotti Park.

New York’s Mayor Michael Bloomberg, no friend of the occupation, and not a member of the “99 percent” by any accounting, is not the immediate problem.  Bloomberg has announced that the Occupiers can stay as long as they obey the law, suggesting that when the weather gets colder, they’ll want to drift off.  My hunch is that many of the Occupiers are heartier, more committed, and experienced enough in winter camping to hold on.

But is a democratic community based on using toilets at local fast food restaurants sustainable–or even desirable?  (See Samantha Bee’s Daily Show piece on the Occupiers and their neighbors.  The Christiania encampment in Copenhagen, which has mostly survived for forty years, provides a cautionary tale.)

Adbusters’ initial call to Occupy Wall Street asked for demonstrators to agree on one demand, and then stay until it was met, but it’s hard to see how that’s relevant–or even possible at this point.  The Occupiers’ intense focus on inclusion and democracy will make coming to any one consensual demand–aside from allowing the Occupation to continue–much less one that could actually happen–could emerge.

So, what could happen?  Complaints from neighbors or from Brookfield Office Properties, which owns Zuccotti Park, could bring the police in to break up the encampment.  Activists would then have to find a way to resurrect the Occupy movement without an occupation, arguing all the while about their right to stay in the park.

Alternatively, a few stalwarts can remain encamped near Wall Street while many others move on to other projects.  Those who stay will work to maintain a community, and their concerns will, unavoidably, focus on that goal, which means talking about their own self-governance, food, shelter, and power (electrical more than political).  This will become less and less interesting to mass media or the rest of America.

Ongoing protest outside the Lorraine Motel

Think, for example, about Jacqueline Smith, who has maintained a vigil outside the National Civil Rights Museum since 1988, when she was evicted from the Lorraine Motel, which now houses the museum.  Smith said that Martin Luther King, who spent the last night of his life in the motel, would have wanted the money and space used for something more than commemoration, like affordable housing.  She calls for a boycott of the museum, which claims more than three million visitors.

More than twenty years on, local passersby rarely raise an eyebrow at her encampment and signs; the protest continues, but without much attention, and even less visible impact.

Protest is powerful when it breaks through routines to draw attention to a set of issues, but new routines can cloud those issues again.  The Occupy campaign has already been spectacularly successful in putting the issue of economic and political equality square in the middle of policy discussions.  When this moment passes, however, activists need to find a way to maintain that focus without relying on a presence in a small private park near in the financial district.

It’s worth thinking about this now.