Take a minute before you get offended.   Of course, there are differences–more below.

Elizabeth Warren, candidate for the Democratic nomination for the US Senate from Massachusetts, is the closest thing to an institutional face of a movement that has, thus far, been resolutely anti-institutional.

This clip is ricocheting around the internet, with Warren giving full voice to the notion of tax justice and the economic obligations of the wealthy.

As Rep. Michele Bachmann did with the Tea Party, Elizabeth Warren was quick to endorse what she sees as the spirit of Occupy Wall Street.  And, like Rep. Bachmann, it hasn’t taken a lot of shifting or agonizing.  Just as Bachmann had established a long activist profile crusading against government oversight of schools, Elizabeth Warren has spent decades in a scholarly legal career pushing for more thorough government oversight of banks.  The vulnerability of middle class families to bankruptcy has been a central focus of her work long before this recession–and even the one before that–and the one before that.

Her academic trajectory, from an undergraduate degree in speech pathology at the University of Houston, to a law degree from Rutgers University-Newark to a professorship at Harvard University Law school, is extremely unusual.  (Law school deans are every bit as status and pedigree conscious as every other academic administrator, perhaps even moreso.)  Along the way, she developed stump skills that are hardly common among academics.  Warren’s second viral video shows her responding to a heckler at a speech in Brockton.  She expresses sympathy for the heckler’s joblessness, then quickly pivots to deplore the Senate’s inability to pass a jobs bill.

Can Warren do for Occupy what Bachmann did for the Tea Party?  Do Occupy activists want her to?

Representative Bachmann tirelessly promoted the Tea Party, raising millions of dollars for conservative candidates for office, and working to elect them as well.  She started the Tea Party Caucus in the House of Representatives, arranging for a few high profile classes for 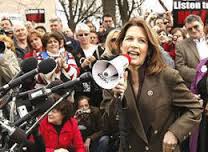 Congress on the Constitution, including a lecture by Antonin Scalia.  In the process, she defined a set of Tea Party demands that were somewhat different from many of the initial Tea Partiers.  The Tea Party emerged with a libertarian voice, enlivened by some Ron Paul loyalists, and as a whole pushed social issues to the back of an agenda fronted by antipathy to big business and big government.  Representative Bachmann rescued the social agenda, placing Christian conservative ethics at the center of her version of the Tea Party, and helping to crowd the libertarians out of the center of Republican discourse.  Rep. Bachmann’s Tea Party is deeply concerned with same sex marriage, abortion, and the place of religion in American life, and this Tea Party, not Ron Paul’s libertarians, is exercising influence in Congress.

Given both their very different politics and their very different pathways into electoral politics, we’d expect some significant differences.  Michele Bachmann was a committed evangelical conservative long before she pursued electoral office, starting her career supporting Jimmy Carter’s campaign for the presidency.  She took her law degree at Oral Roberts University, and started politics at the grassroots level, in defense of community-based Christian schools.  She’s learned to trust the wisdom (and information) of regular people who agree with her, and to articulate their concerns without routinely subjecting them to any kind of fact-checking.  This approach has proven problematic in the spotlight of her presidential campaign, and virtually every mainstream media outlet has published at least one piece on her routine misrepresentation of facts.  (Here’s non-partisan Politifact’s overview.)

Elizabeth Warren is a law professor who has produced more than 100 academic articles, a half-dozen books, working in a profession where getting the facts wrong is fatal.  She’s unlikely to frustrate Occupy activists by promoting comforting or provocative stories that aren’t true while playing to friendly crowds.

There is, however, another potential problem for the people camping in the parks.  Unlike many of the Occupiers who’ve been able to get their views in mainstream media, Elizabeth Warren believes in government and in regulation.  Her vision of reform isn’t based in building consensus-based communities, but in empowering government to ameliorate gross inequality, to spend on building infrastructure for a large and complicated

economy, and to exercise strict oversight over the banking and finance industries.   Although some conservative critics disagree, she’s not out to destroy global capitalism. Hers is a far more developed–and far less utopian–vision than what activists have been able to articulate in the General Assemblies across the nation.

As Michele Bachmann was able to supersede the libertarians in defining the Tea Party, Warren’s success would dramatically overshadow the anarchists in the tent cities, pushing an Occupy that would look like an invigorated progressive wing of the Democratic Party.

This is one way movements become institutionalized…and effect influence.

Author and professor of Sociology and Political Science at the University of California, Irvine
View all posts by David S. Meyer →
This entry was posted in Uncategorized and tagged bankruptcy, Elizabeth Warren, institutionalize, michele bachmann, Occupy, parties, tea party. Bookmark the permalink.