Catastrophes can be opportunities for activists prepared to exploit them.  Hurricane Sandy looks like a good chance for climate change activists to

put their concerns on a national political agenda that has been incredibly inhospitable.  Their challenge is to attach an explanation for an event to an analysis of an ongoing problem–and a program of solutions.

For decades, environmental activists have been working with increasing intensity to bring public attention to the problem of climate change.  In most of the rest of the world, they’ve enjoyed some success, with governments of the left and right undertaking steps to reduce the increase in carbon they produce.

Their efforts in the United States have enjoyed less success.  In 1992, President George H. W. Bush mocked his opponent’s running mate, Senator Al Gore, calling him “ozone man.”  The issue of climate change didn’t play much of a role in Bill Clinton’s 1992 victory, nor in his presidency.  When Vice President Gore ran for president himself–against another George Bush, he mostly stayed away from the issue, even though he had a long record and a great deal of knowledge about it.  He saw no electoral benefit in talking about steps to confront climate change, and a great deal of risk.

Mobilizing on behalf of policies to confront climate change a hard sell for most citizens.  Temperature changes of a degree or two don’t seem all that significant to most people most of the time, and hardly as urgent as bad roads, ongoing wars, or taxes.  Effective remedies will cost money and cause some reconsideration of what’s convenient.  Candidates for office don’t like to promise to raise gas prices, for example.

President Obama has apparently made the same electoral calculation as Vice President Gore.  Governor Romney has been more likely to raise the issue, and only in derision.  Indeed, he backed away from his own climate record in Massachusetts, knowing it would be toxic in the Republican primaries and knowing that it would hurt him among hard core conservative activists financed by Koch brothers groups.

Over the past four years, climate change activists have tried to find ways to confront a recalcitrant ally in the Oval Office, and a public that is hard to awake, much less mobilize.  A few dramatic events, including protests against the Keystone pipeline, broke through national news, but more important over the long haul was building organizations and infrastructure to make a broader effort. Meanwhile, conservative groups have worked hard and successfully to undermine the idea that organized science might have some insights into the climate.

Sandy’s devastating impact on the Northeast, still developing, may have opened a window of opportunity for the activists to reach a broader audience.  Of course, you can’t explain a particular event with reference to processes that have played out for decades, but we want easier explanations for crises.   Climate change didn’t make the storm, but it did mean that water levels in New York Harbor were higher than in years past before the storm, that surface temperatures in the Atlantic were unusually warm, and that a potentially ameliorating ice block by Greenland was severely diminished.  And these points were made by weather reporters, not just political figures.

Suddenly, climate change is on the electoral agenda; New York’s Mayor Michael Bloomberg, who has worked hard to maintain a non-partisan image, just announced his endorsement of Barack Obama’s re-election, citing this issue, no doubt recognizing that as unlikely as purposeful 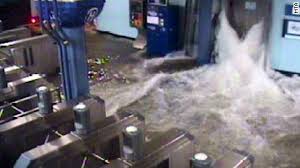 The benefits of sudden events come to those who have prepared.   The nuclear power accident at Three Mile Island swelled the attendance at a Washington rally that had already been scheduled. The challenge for activists, not just in the next few days, but after the election, is to keep the urgency of the issue as alive as concern about the storm and flooding at the moment.  The work they’ve done in the past should help.