Naked truth; nude protests and the politics of attention

The story is that Lady Godiva rode through the streets of Coventry naked on a dare some time in the 11th century.  After repeatedly complaining to her husband, Leofric, who had imposed those taxes, she took more dramatic action.  Leofric promised to lower taxes only after she had rode through the streets naked–knowing that she would never do so.  But she trotted through town and became a hero to the people of Coventry.

Probably not, but it’s a good story that started circulating roughly a hundred years after it was supposed to have happened, and it works for our purposes.

They are concerned about federal funds for medical care, particularly for AIDS.  Because the United States spends so much on health care (nearly double what any other rich country spends), budget hawks always look at these unkindest cuts.  Worse, Medicaid, which serves the poor, is a particularly tempting target for cuts because it does not have a strong organized lobby.

So activists disrobed in the lobby.

No reports that Speaker Boehner was there, which is fortunate; he didn’t have to avert his eyes to avoid seeing, uh, their message.  That poor sick Americans might suffer as a result of cuts to spending on medical care is an inconvenient fact for someone whose caucus is far more worried about cuts to military spending–or raising taxes.

But Speaker Boehner wasn’t their target anyway.  By taking off their clothes, they were able to generate national attention, not only to their tactics, but also to their cause.  At least some of the coverage praised the activists for raising the real issues associated with dramatic cuts in what the federal government actually does. 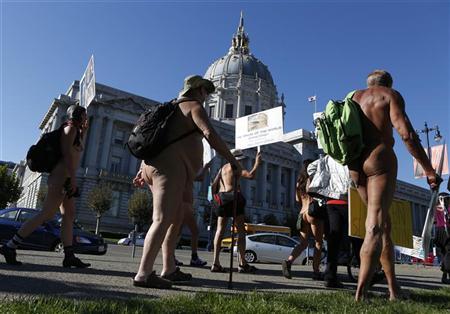 protesters rallied nude to protest—a law that would require them to be clothed.  According to Scott Wiener, who introduced the ordinance, there’s nothing wrong with occasional nudity, particularly in the service of a cause.  When, however, nudity becomes routine, so that a nude protest wouldn’t even be newsworthy, it’s time for government to act.

2 Responses to Naked truth; nude protests and the politics of attention