Only a small part of any comprehensive immigration reform proposal that the Senate considers will address the Dreamers, young people brought without papers to the United

States as children, but the revival of immigration reform is directly attributable to their efforts.

The influence of social movements plays out over long periods of time, in often indirect ways, and the brave coming out campaigns led by young immigrants shook up mainstream politics in ways that are far too easy to neglect.

In the first years of the Obama administration, with comprehensive reforms invisible on the mainstream political agenda, young activists pulled out the piece of reform most relevant to their lives: a path toward recognition and citizenship for those who immigrated as children and found their lives stalled when they finished school.  They couldn’t work legally, or even drive, and they lived in constant peril of discovery and deportation.  The DREAMers represented America’s best and brightest, mostly students who want to dig into America.  In risky campaigns, they disclosed their unstable status while risking arrest, protesting on the streets or even occupying the offices of hostile legislators.

Some Democratic members of Congress took up their cause, pressing not comprehensive reform, but just a place for young people who had been immigrated by their parents, and 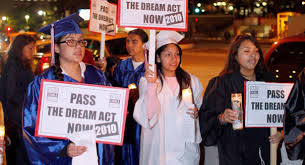 only those willing and able to go to college or serve in the military.  The DREAM Act enjoyed majority support in the lame duck Congress at the tail end of 2010, but a filibuster in the Senate stalled the effort, devastating the DREAMers who now faced a Republican House of Representatives.

But the DREAM didn’t die.  The politics of immigration took a backseat to the economy in the lead-up to the 2012 elections, but not too far back.  Republican hopefuls, trying to ingratiate themselves with primary voters, offered tough, then tougher, stances on undocumented immigrants, including the DREAMers.  Mitt Romney, the eventual nominee, promised a set of policies that would encourage self-deportation.

And Latinos turned out at the polls in unprecedented numbers, voting against the Republican ticket overwhelmingly.  Latinos voted for Democrats in about the same percentages as American Jews, but there are many more of them, often in swing states.

“The politics on this issue have been turned upside down,” said Democratic Senator Chuck Schumer (New York), “For the first time ever, there is more political risk in opposing immigration reform, than in supporting it.“

The DREAMers turned those politics upside down.

Now mainstream politicians are trying to right those politics.  Despite Sen. Schumer’s analysis, Republicans face plenty of risks in advocating reform.  From the precinct level on up, many Republicans got elected with promises of preventing any kind of amnesty for immigrants.  The prospects of anti-immigrant challenges from the right are serious.  What’s more, any kind of path toward citizenship means a procession of new voters who will start without much sympathy for the Republican Party. 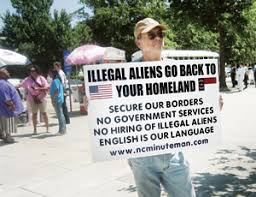 quickly enough that the issue is no longer important or visible two years hence.  Providing more visas for high tech workers is a relatively easy and attractive aspect of immigration reform.  So is the DREAM Act.  A new legalized status for immigrants that can’t lead to citizenship or a suspension of all moves toward citizenship until the borders are certified as “controlled” are sparkly alternatives for Republicans trying to thread a slender needle.

The challenge for DREAMers is to make sure the boundaries of reform aren’t so limited.  Their efforts made this moment possible, but absent their continued pressure, the outcomes are likely to be extremely disappointing.

Author and professor of Sociology and Political Science at the University of California, Irvine
View all posts by David S. Meyer →
This entry was posted in Uncategorized and tagged anti-immigrant, Charles Schumer, coming out, Dream, immigration, influence, Marco Rubio, outcomes, protest. Bookmark the permalink.