Anti-austerity protests have reappeared across Southern Europe.  Citizens are taking to the streets to protest cuts in services and high unemployment.  Where’s the protest in the United States, where we are embarking on new cuts in government spending (call it sequester) and unemployment remains high.

To ask the question suggests a misunderstanding.  There’s plenty of protest in the United States, although it is surely taking different forms than the demonstrations in Spain or Greece.

When most of us talk about protest movements, we have some kind of example in mind.  It 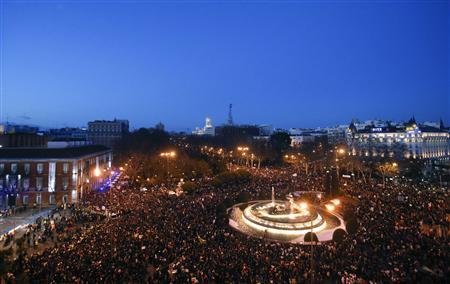 might be the Arab Spring events that ran across the Middle East and North Africa or the Occupy encampments, or, probably more commonly, the civil rights movement of the 1960s or labor organizing in the 1930s.

A signal movement becomes a template for each of us, and while we search to see it repeated, we risk missing what’s happening around us because what comes next is different.  This happens all the time.  Really.  It happened the other day:

Europeans have protested in dramatic and disruptive ways about austerity policies their governments are trying to impose.  You’ve seen the pictures of massive demonstrations, sometimes veering into confrontation with police and destruction of property.  HuffPost Live invited me to participate in  a discussion that was on the absence of such protests in the United States.  You can watch it here (discussion online).

The host kept asking why Americans don’t protest, but that’s wrong.  This was just days after 35,000 people turned out to protest the Keystone Pipeline, a month after the annual Right to Life March, and in the wake of the Tea Party and Occupy movements.

The complicated and perhaps unsatisfying answer is that austerity programs–and unemployment–are worse in Southern Europe than in the United States, and that we lack strong institutional actors invested in supporting such protests (look for a labor movement, to start).

The larger, perhaps more interesting point, is that tomorrow’s movements won’t be just what we expect, and if we focus only on what we call a movement in the past, we’ll neglect the meaningful politics of the present and future.  People will protest on the issues they care about and in ways that they think will be effective, and not follow old scripts or analysts’ directives.

The movements that spring up to challenge tomorrow won’t follow the recipes laid out by analysts or activists.  Every day, new campaigners demonstrate anew what democracy looks like.

Author and professor of Sociology and Political Science at the University of California, Irvine
View all posts by David S. Meyer →
This entry was posted in Uncategorized and tagged austerity, democracy, Greece, history, protest, Spain. Bookmark the permalink.