Auditing the Tea Party: One style of American repression

Another example of the old joke: just because you’re paranoid doesn’t mean they’re not out 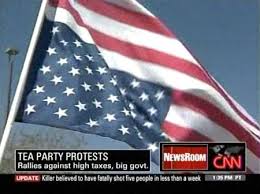 The revelation that the Internal Revenue Service targeted groups with “Tea Party” or “Patriot” in their names for strict scrutiny tells us absolutely nothing good about either the Tea Party movement or the government its adherents distrust so much.  Expect more to come out, but right now we know that at least 75 groups with suspicious names (as above) were flagged by IRS employees for investigation.  Their applications for tax-exempt status [501(c)4] were delayed, and the applicants were subject to unusually intrusive questions about donors and intent that violated IRS policy–and maybe the law.

This is not to say that current policies about tax-exemption are wise or serve democracy well (see Matthew Yglesias), particularly in the brief post-Citizens United era.  But the whole notion of liberal [yes, liberal] democracy is equivalent treatment for groups and

citizens regardless of their views; government isn’t supposed to pick sides.  Establishing a special category for Tea Party groups, allegedly instigated by low level employees, was apparently known about up the chain of command for at least two years.  This should be disturbing–but not necessarily surprising.  There is, as we know, a long historical record of our Federal government going after groups and individuals that someone in power thought were dangerous and unAmerican.  The list is sure to include at least some that you despise, for example (a very partial list): the Communist Party, Daniel Ellsberg, the Black Panthers, the Ku Klux Klan, pacifists during wartime, journalists of all sorts, Martin Luther King, and Clark Kerr.  But the democratic ideal is always for more debate and more sunlight.

Well, we live in a fallen world.

The IRS has apologized, promising a full investigation–and even if they don’t deliver, be sure that the Congress will.  Whatever additional information surfaces, it will be amplified and promoted by activists and elected officials interested in discrediting the Obama administration–and government in general.  Politically, it’s worlds better than repealing health insurance reform (again) or producing an honest budget.

The IRS harassment of Tea Party groups that we know about so far, however inexcusable, is mild compared to what many many other activists have suffered. This doesn’t mean, however, that it doesn’t matter or wasn’t damaging.

It’s important to remember how such harassment works.  Minimally, it raises the costs of political engagement for people someone in government doesn’t like.  In this case, Tea Partiers are forced to spend more time and money doing something that the IRS effectively made easier for people with different political views.  Time that could have been spent developing coherent analyses, political strategies, or reaching out to potential supporters is spent, instead, talking with a lawyer or accountant (generally on the clock) about filling out forms and requests for information.  At a moment when the Tea Party was still effectively mobilizing, partisans were distracted by something else.

It can be worse.  Fooling around with the IRS is no fun for anyone, and such experiences can dissuade many people from future politics altogether.  The intent of such harassment is to separate the committed hard core from the marginally engaged who might sometimes join them.  It’s the latter group that matters most, most of the time.

Activists on the left, unsympathetic to Tea Party causes, should be particularly sensitive to such harassment.  They should remember that a bureaucracy that gets away with going after foolish or unpopular causes can easily turn on them next.

14 Responses to Auditing the Tea Party: One style of American repression