Or not?  Conventional wisdom among Republican regulars was that the

Party’s harsh “self-deportation” posture was costly in the last election.  Party establishment figures pushed for quick action on immigration reform to put the issue behind them so that they might compete a little more effectively for Latino voters (pulling even 35% would be a huge improvement).

But Republicans held control of the House of Representatives, drawn into districts in which supporting reform could be toxic.

So, there’s a split within the Party, between business conservatives, who support access to labor, and populists at the grassroots who can capitalize on the fears of White voters about the impending loss of….jobs? culture?

The Tea Party holds the same debate.  Most of national Tea Party groups, most notably FreedomWorks and Americans for Prosperity, like business conservatives and libertarians, support access to immigrant labor–and a less than skeletal welfare state to support them.  [Tea Party Nation, smaller and somewhat marginal, is the notable exception.]

At the grassroots, however, immigration is a hot button issue that gets people to go to meetings, hold signs at demonstrations, contribute money to candidates, and wear  colorful outfits.

During the Tea Party’s heyday, 2009-2010, the powerful national groups tried to keep the immigration issue from emerging and dividing.  They weren’t quite successful.

Now Senator Marco Rubio (Florida), who enjoyed extensive and enthusiastic Tea Party support, has tried to front the Republican effort for building a 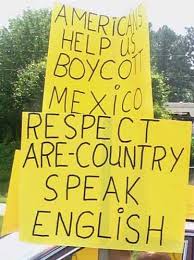 compromise that will lead to an immigration bill.  It’s worth remembering that Senator Rubio’s provenance extends well back before the emergence of the Tea Party.  He had served as Speaker of the House in the Florida’s House of Representatives.  He was always conservative, to be sure, but he was also a pragmatic politician who could count votes and make deals.

In the past few weeks, Senator Rubio and others have tried to build Tea Party support for immigration reform.  At least they wanted to neutralize opposition.  Regardless of what happens to the current immigration reform effort, the percentage of Latinos among the voting universe is going to increase, and  there’s always been at least a racist tinge among the immigration opponents.  The recovered public policy dissertation of Jason Richwine, coauthor of Heritage’s polemical study, is  a recent–and relatively mild–example.

So, leaders from Tea Party Express and other national groups met with Sen. Rubio to discuss issues and chart strategy.  It was always going to be an uphill struggle.  Now, however, it seems like an even steeper hill to manage.

Leaders of other Tea Party groups, most notably Tea Party Patriots, which sought to maintain a grassroots orientation, have issued a letter decrying the immigration bill Sen. Rubio has spent months negotiating, while other conservative leaders are urging/demanding Republican senators walk away from the compromise.

So, Tea Party groups are active on both sides of the most contentious national issue of the moment, and they battle exclusively within the Republican Party.  Establishment Republicans fear they will pay a price,

again, for scuttling reform, while grassroots opponents are prepared to hold elected officials responsible for any small steps toward recognizing eleven million immigrants with anything more than a fence and E-Verify.

At the moment, it seems like a no-win issue for the Tea Party or for the Republican Party.  Their best outcome, to have the issue disappear quickly, seems unlikely; immigration rights activists won’t let that happen.

Alternatively, they can try to find a way to blame Democrats for the failure to reform, pointing to President Obama’s generic leadership deficits, or the efforts of Senator Patrick Leahy to include immigration opportunities for same sex spouses and partners of American citizens.

It might work–for a while–but just as most of the eleven million are not going to go away, neither is the immigration issue, and it sits across a fundamental schism in the Tea Party movement and the Republican Party more generally.