Jailing Kim Davis and creating a cause

will be relatively small and relatively brief.  But today, The Daily News reports that roughly 200 supporters rallied in Grayson, Kentucky to protest her imprisonment.  And to pray. Presidential candidate Mike Huckabee has promised to meet with Davis to show his support.  (Gay marriage supporters demonstrated as well!)

You see, Judge David Bunning’s decision to jail Davis shifted the balance of suffering.  Up until yesterday, only people who wanted to get married in Rowan County were suffering for Kim Davis’s religious beliefs.  The County clerk had defied a Federal Court order to allow her office to issue marriage licenses, and worked the legal system to try to protect her choice.  Davis got no support from the legal system. Judge Bunning gave her the chance to prove her commitment by suffering for the cause; she took it.  Meanwhile, her staff commenced issuing licenses.  (Davis’s lawyers say they aren’t valid, by the way.) Insulted, demeaned, and delayed, the betrothed no longer had a grievance.  Meanwhile, Kim Davis’s willingness to suffer for her beliefs inspires her supporters.

Does it last?  If you want to work in government, you have to play by its rules.  Long ago, 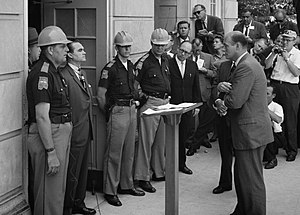 Alabama Governor George Wallace honored his campaign promise to stand in the school house door to block racial integration.  It was quite a show, but Governor Wallace stood aside when ordered by the federal government–backed with the force of the National Guard.  He remained in office, and he continued to campaign against integration, even running for president on a state’s rights platform in 1968.  Later, there was a change of heart, but at this point, we see that he wanted to keep his job and acceded to the law.

remove a massive granite monument to the 10 commandments that he’d had installed in the court house.  (The Constitution prohibits government from endorsing any religion–even if it’s the most popular one in the country, state, or county…)

This was not the end of Judge Moore’s career, not by a long shot.  Apparently, defying the federal judiciary is still good politics in some parts of America.  After a failed campaign for governor, and a flirtation with his own presidential campaign, Moore ran for Chief Justice again in 2012–and won.

By the way, you might not be surprised to hear that CJ Moore also opposes same sex marriage, and has advised probate judges in the state to disregard the Supreme Court, sticking instead with Alabama law which restricts marriage to mixed sex couples.  The Southern Poverty Law Center has filed an ethics complaint against the Chief Justice….resolution pending.

Standing up against the federal government sometimes makes for good politics–locally–at least for a while.  But a government payroll won’t provide a foundation for that defiance–at least not for very long.