Most of us tuned into the story about the ouster of University of Missouri president Timothy Wolfe last weekend, when the football team weighed in to support a hunger 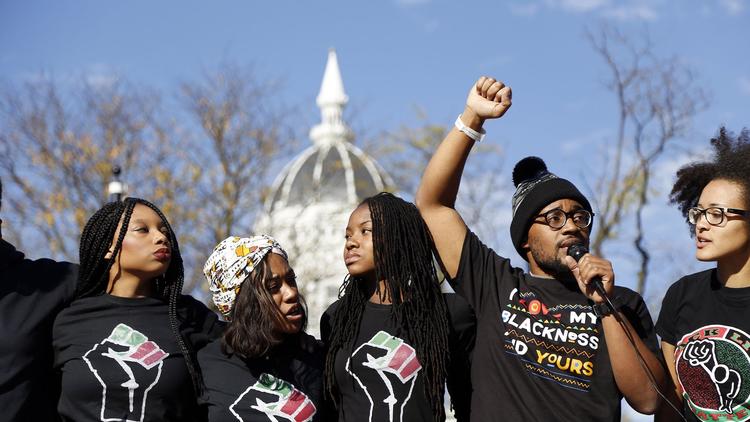 striker, and saw a sudden and conclusive end when Wolfe stepped down and Jonathan Butler started eating.

It’s a nice short story with well-defined sides and a convincing resolution. That story emphasizes the power of collective action–for good or ill, depending upon your sympathies.

Real life, of course, is more complicated, and even extending the tale a little ways backward and forward gives us a better sense of how social movements really work.

To start, hunger striker Jonathan Butler says that he began to tune into the politics of race on campus during the protests in Ferguson, about a hundred miles from the university. He shuttled back and forth between his academic studies and what was then the front lines in a political battle, describing the effect as transformative (See Matt Pearce’s profile in the LA Times). With others similarly inspired, he organized a campaign to draw attention to the racial climate at the University of Missouri, which included letters, requests for meetings, protests, and the tent city on the quad. The fast was slow in coming, and many of his classmates were already paying attention. Like a career in the arts, overnight success took a long time and a lot of effort.

And after the splashy victory, it’s hard to think that the departure of two administrators could fix the broader concerns about the racial climate that spurred the protests in the first place. Concerned Student 1950, the small group of activists that launched the campaign, has demanded further action on curriculum and faculty hiring, demanding a meeting with Missouri governor Jay Nixon, and representation on the committee that picks a successor.

Next steps are always more difficult, and maintaining the breadth of the active coalition, including support from athletes and academics, is far from automatic.

Effective activists start long before anyone’s paying attention, and they have to continue long afterward.

By the way, a student protest toppling a university president by threatening intercollegiate sports does not generate universal support. Clay Travis’s take-down at Fox Sports’s College Football Blog is worth a look to see the rhetorical battle unfolding.  Travis questions whether any of the racist incidents actually took place, and whether the administration could have–or should have–done anything about them if they had. He also charges Butler with concealing his very affluent background and questions his long tenure at Mizzou–if things were really this bad. Aristotle would call the questions about veracity challenges on logos, and those of Butler’s character, questions of ethos. The final concern, that college football might actually be threatened, could boil the blood of College Football readers: pathos.