Remember Occupy? At the height of the movement, students at UC Davis attempted their own encampment. Pepper spray appeared, like a pop quiz, as an unexpected and painful addition to the curriculum. 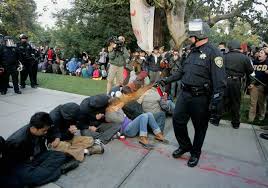 The overly enthusiastic response of campus police made for an awful image. (You can see the video at the link above to an earlier blog post above.) It made the officer, the campus police, and the Chancellor, Linda Katehi, look bad. It wasn’t just the public; a task force charged by the university with investigating the incident, and headed by a former California Supreme Court Judge, found the pepper spray completely unjustified, and the product of gross mismanagement at every level of UC-Davis, including Chancellor Katehi.

The magic of photoshop allowed innovators all over the internet to memorialize the pepper-spraying cop. The Last Supper, at left, is my favorite, but it’s still easy to find images of the Davis officer spraying cartoon animals, the Beatles, Spongebob Squarepants, the founding fathers, a baby seal, and oh so many others.

We’ve just learned, however, that UC-Davis worked hard and spent a lot of money to try to make it more difficult to find such pictures. Seeking to cultivate a better image, Chancellor Katehi approved expenditures totaling at least $175,000 to purge the story from the internet. That’s tuition, fees, and expenses for nearly six students, or a good chunk of a middle level administrator’s salary. In a time where money is tight at public universities–and I’ve never known any other sort of time–it’s hard not to be offended. Making it even worse, it couldn’t ever work so well. Do your own search.

In the meantime, think about how important the way authorities deal with protesters is–particularly in a democracy. We’d hope that alumni tear up for other reasons in looking back at their college careers. Clearly, there’s good reason to want to hide the past. If that doesn’t work, it makes sense to be careful about how to respond in the present.

Author and professor of Sociology and Political Science at the University of California, Irvine
View all posts by David S. Meyer →
This entry was posted in Uncategorized and tagged Davis, history, Last Supper, Linda Katehi, pepper spray, Photoshop, police, Spongebob Squarepants, The Beatles, university, University of California. Bookmark the permalink.

3 Responses to UC Davis, the protest challenge, and history