The violent fringe and police violence

The killing of five police officers in Dallas last night isn’t going to do anything to help the ongoing problem of police violence.

The horrific attacks and deaths are shocking: the organized killing of law enforcement officers just doesn’t happen routinely in the United States.

We can mourn these deaths while remembering that it doesn’t take long to count to five when listing the names of black men wrongly killed by police. Alton Stirling (Louisiana) and Philandro Castile (Minnesota) are the two most deaths known nationally–but in every large city activists can quickly reel off a list that’s frighteningly long.

The demonstrations in those large cities over the past two days reflect an increased awareness that the individual police killings of mostly unarmed, mostly young, and mostly black men just aren’t that unusual. (We search for numbers.) Over the past few years activists across the country, often under the broad banner of Black Lives Matter, have worked hard to make sure the incidents of police violence don’t pass unnoticed. National social media networks and local groups are now well-prepared to respond to the next incident, generally with large, peaceful, and forceful demonstrations.

But a few troubled individuals, unconnected to the larger developing movement, have sometimes targeted police; opponents of Black Lives Matter have worked to blame the movement, citing inflammatory rhetoric when they can’t find other other ties. This is a familiar movement story: advocates try to tie their opponents to the most offensive exemplars they can find. The rest of us have to sort out which connections are real.

It would be a tragic and damaging mistake to allow a small band of snipers, apparently with no connection to the larger movement, to discredit Black Lives Matter and its concerns, but both supporters and opponents will try to help us make that mistake. The organized sniping of police isn’t a legitimate and effective response to differential policing; the organized sniping of police isn’t a natural outgrowth of protest to differential policing.

In the next days, it will be easy to lose track of these basic points. Police officers who feel threatened will have their worst fears confirmed. Anti-violence activists will have to confront more public criticism (politically motivated) and warier police. They–and we–will have to work harder to focus on the big picture. 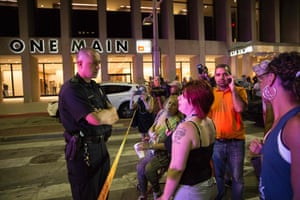 Although we should be careful about accepting the earliest reports of the demonstrations and the shootings uncritically, but thus far:

It appears that the Dallas police have worked cooperatively with local activists to address the problem of police violence, and worked professionally to protect the demonstrators.

Some activists were legally and openly carrying weapons during the demonstration, which apparently had no effect on promoting or deterring violence.

It appears that the shooters had no connection with the local or national Black Lives Matter movement.

If all this is right, the challenge remaining is to respond to a terrible crime without letting it obscure a much larger set of issues that animated a peaceful demonstration.

Author and professor of Sociology and Political Science at the University of California, Irvine
View all posts by David S. Meyer →
This entry was posted in Uncategorized and tagged Alton Stirling, black lives matter, Dallas, Philandro Castile, police violence, violence. Bookmark the permalink.