After the fall….what kind of protest follows?

I wrote yesterday’s post about concession speeches when I assumed, having steeped myself in all the aggregators and prognosticators I could find, that Hillary Clinton was going to win, and that Donald Trump would face the dilemma of navigating the concession ritual. Having to explain how I got this wrong is far and away the least consequential fallout from Trump’s election.

So, Hillary Clinton delivered a moving concession speech this morning, stamped out of the standard model I described yesterday.  Trump’s win gave him the more attractive task of claiming victory and promising conciliation. He promised, as Barack Obama and George W. Bush did–and Hillary Clinton certainly would have, to be the president of all Americans.

This laudable aim is difficult to pull off; certainly, neither Bush nor Obama were able to convince large segments of the American people that the president was operating in their interests. I’d think it would be even more difficult for Donald Trump.

But politics doesn’t end after an election, and even if Hillary Clinton won’t be out in the streets protesting, others will be. When someone new comes into office, the prospects and provocations that face activists across the political spectrum shift. 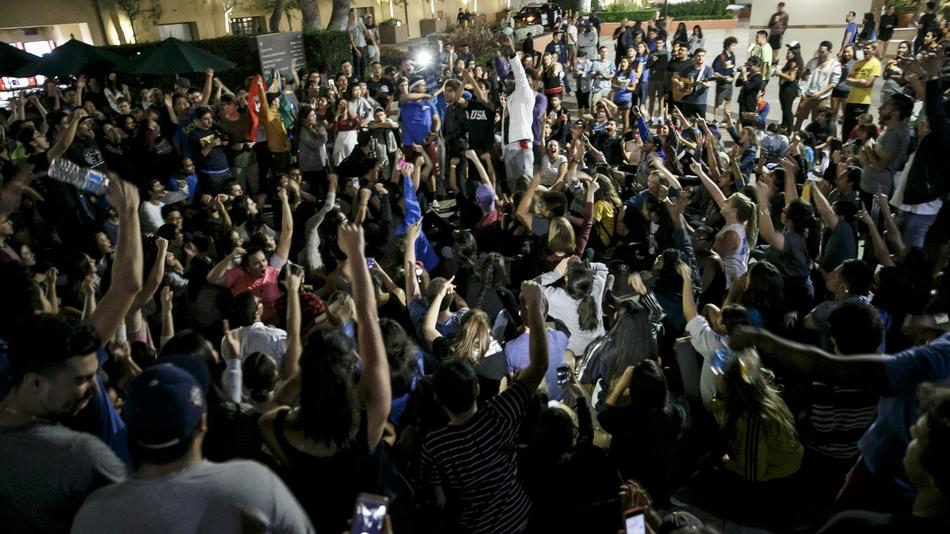 Some of those frustrated by the electoral results started protesting right away. College students marched against Trump on their campuses, including here at the University of California, Irvine. This first round of protests targeted Trump generally, and students announced their appreciation for diversity. Protests like this will surely continue through at least the inauguration of President (ulp!) Trump in January.

But that won’t be all of it. As appointments and prospective policies start pouring out of the Trump administration, activists will respond to the provocations they see. Candidate Trump promised to keep Muslims out of the country, to round up and deport undocumented immigrants, to repeal the Affordable Care Act, to build a Great Wall on the Mexican borders, to cut taxes for wealthy Americans, to withdraw from international agreements on climate change and trade, and to reduce regulations on coal mining and guns (to pick two). Plenty of people will be aggrieved.

With the Republicans, ostensibly allied with the new president, in control of both houses of Congress, people who want to fight unwanted policies will see little reason to focus on the legislative process, and much more incentive to take to the streets. This has happened before: in 2009 when Barack Obama worked to pass health care reform through a Democratic Congress, the Tea Party emerged  to challenge reformers through demonstrations large and small, and confront Democratic legislators at town meetings. The Tea Party shifted tactics and became less visible after Republicans won control of the House of Representatives in 2010. There’s no reason to expect opponents of Trump’s policy proposals not to fight back.

But it’s not just his opponents. The Trump campaign emboldened a nationalism cloaked in

various shades of white (see Ku Klux Klan leader David Duke, a Trump enthusiast, at left). The campaign to “Make America Great Again” evoked a paler paradise located in a non-specific past where the white working class lived at the center of a much less colorful American dream. At least some Trump supporters will expect the new president to deliver on a set of essentially impossible promises. If he fails to deport masses of immigrants or create large numbers of well-paid manufacturing jobs for less educated workers, for example, expect those supporters to challenge him as well, and try to take nationalist politics into their own hands. It could get very ugly.

Trump’s election turns a page in a surprising end to a chapter in the American story. But it’s certainly not the end, and there’s no reason to believe it gets either easier or less disruptive.

1 Response to After the fall….what kind of protest follows?