What these protests do…

Young people, particularly in places that didn’t support Donald Trump, continue to protest his election. (Below, you can see high s 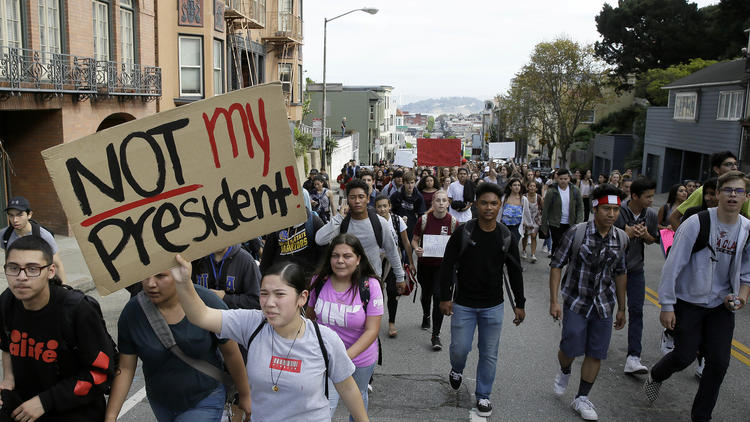 Two months before his inauguration, it’s worthwhile to think about just what these demonstrations can do.

To start, it’s extremely unlikely that the sincerity and vigor of the demonstrations will convince Donald Trump to resign in advance, nor motivate thirty plus Republican party stalwarts elected to the electoral college to vote for Trump to defect from their commitments.

Demonstrators demonstrate their convictions that Trump is unfit, by virtue of program or character, for the White House. Their concerns, about racism, misogyny, or the environment, to note just a few, draw public attention to Trump’s promises and his proposed appointments. They may provide a thumb on the scale for or against particular candidates for office and specific promises. The protests may also encourage Republicans in Congress to counsel the president-elect, or even to oppose some appointments or programs.

The protests set a policy agenda for news media, and pose questions that will be relayed not only to the new administration, but also to its supporters, inside and outside government. This week we see questions posed to the Trump campaign about just how racist, sexist, and anti-Semitic new senior strategist, Steve Bannon, really is. That’s not the conversation the administration wants to have. Trump can still decide that Bannon’s counsel is worth the hassle, but as long as the demonstrations continue, that cost will remain.

who turn out to protest see others who agree with them, and some of the other 61 million plus people who voted against Trump, watching the action online, see that they are not alone. People who take an action, carrying a placard, making a call, or even wearing a safety pin, identify themselves as activists, and are more likely to take another step. They’re also more likely to be asked to do something. Already, contributions to groups at the core of the new Trump opposition, like Planned Parenthood and the American Civil Liberties Union (ACLU) have seen spikes in their fundraising. Like fundraisers, good organizers make lists and know to go back to people who have already demonstrated their willingness to respond.

Demonstrators in action meet people who agree on Donald Trump, but have different priorities: abortion rights, civil liberties, immigration, environmental protection, police violence, for example. Making contacts and learning issues is how political coalitions are built in the streets.

Demonstrators also pressure local authorities to declare their own politics through action. Here in California, leaders of the state legislature, local police departments, and university administrators have declared their opposition to mass deportations.  Signals of support aren’t enough, but they matter. Resisters can’t stop Immigration and Customs Enforcement (ICE) officials from doing their jobs, but they can refuse to cooperate with them, passively, or openly by declaring zones of sanctuary. They can make deportation marginally more difficult.

And such sanctuary declarations expand the new administration’s list of opponents. Trump and some of his Congressional supporters have already announced their intent to cut federal funds for sanctuary cities and campuses. I doubt that majorities of Republicans will be willing to cross that line by explicitly defunding their cities and universities.

Taking a stance polarizes and engages a larger crowd, some of whom might then be enlisted in the great political battle. Right now, we’ve seen relatively small protests in mostly supportive settings, focusing on Trump himself and his campaign promises. The activists’ challenge will be to continue and focus their efforts as concrete policy proposals emerge from the new president and the Republican Congress. The first demonstrations that we’ve seen are just the start of what can be a much larger and more powerful politics.