icy decriminalizing  slighter smaller-scale official corruption , Romanians took to the streets quickly and in very large numbers.  An estimated 600,000 people demonstrated across the country, with perhaps 250,00 in Bucharest.

Relatively quickly, after six nights of protest, the government withdrew the new policy. Romanian leaders did not feel comfortable ignoring the voices in the streets. 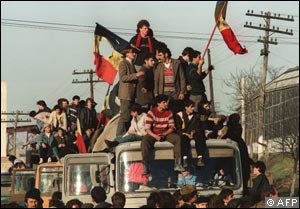 Remember, it’s not all that long ago, in 1989, when the Army deserted the government after days of fighting demonstrators in the streets. Protesters overthrew the government, captured President Nicolae Ceausescu, and summarily tried and executed him. Communist governments fell in Czechoslovakia, Hungary, Poland, East Germany, and Bulgaria within a few months, but no transition was as violent and scary as the one in Romania. Surely, everyone in government making decisions is well aware of those events.

At this writing, the protesters continue; the current president, a critic of the current coalition government, has described this moment as a “full-fledged” political crisis.

Author and professor of Sociology and Political Science at the University of California, Irvine
View all posts by David S. Meyer →
This entry was posted in Uncategorized and tagged 1989, Bucharest, cold war, corruption, Nicolae Ceausescu, Romania, Sorin Grindeanu. Bookmark the permalink.