Is this school shooting different? Teens take over!

Emma Gonzalez is mad, informed, engaged, and powerful. If you haven’t seen this yet, it’s worth 10 minutes of your time.

It’s hard to remember that the tragically high numbers of deaths from gun violence in the United States are eclipsed by many more survivors, more poised for political action than ever before. Emma is great, sharp, smart, and committed. And she’s not unusual or alone:

My friends, classmates and teachers are dead. I see the media portraying them as good children who were smart and kind, but they were much more than that.

My friend Gina is dead. I had just talked to her that morning in art class. We laughed together, we sang together, we smiled together. We will never do that again. How could someone be this despicable? When I think about it, I start bawling.

We can’t let innocent people’s deaths be in vain. We need to work together beyond political parties to make sure this never happens again. We need tougher gun laws.

Student survivors filled every social media channel, posting about their pain and their commitment, and demanding that adults do better. Several students also cracked the television news shows.

Cameron Kasky was one of a group that made the rounds of the Sunday shows, and announced the student strategy. On ABC News he announced a new focus tied to a familiar tactic:

People are saying that it’s not time to talk about gun control. And we can respect that. Here’s a time. March 24th in every single city. We are going to be marching together as students begging for our lives.

Any politician on either side who is taking money from the NRA is responsible for events like this, At the end of the day, the NRA is fostering and promoting this gun culture.

These young people are not going to be satisfied with thoughts and prayers, or cooled out by politicians expressing their heartfelt concerns and sympathies. They know that the repetition of mass shootings isn’t a normal feature of life in advanced democracies. They know that gun control helps.

Their plan is to mobilize teens–and their supporters–across the country, and rather than focus on a particular set of reforms, focus on the toxic role of the National Rifle Association (NRA) in the political debate. Emma proclaims that she will ask President Trump how much he received from the NRA, but won’t depend on the accuracy of his answer; she already knows: $30 million. Cameron outlines the plan to stigmatize any politician who takes money from the group–and it’s almost every national Republican.

We’ve been through it before, in Tucson, Arizona, where Rep. Gabby Giffords was among those shot by a crazed gunman, and in Newtown, Connecticut, where a crazed gunman targeted an elementary school.

The NRA and its supporters stay quiet while outraged supporters of gun control stage events and issue demands, and then everything stalls in Congress, where NRA-supported politicians have been able to stop anything from happening. States often pass laws around the margins, but roughly half the time, those laws make it easier to get guns. And then other issues crowd out guns for most people.

The student initiative is building on not only a foundation of fatigue and horror, but also political organizing that’s taken off since Newtown, and particularly in the last year. The 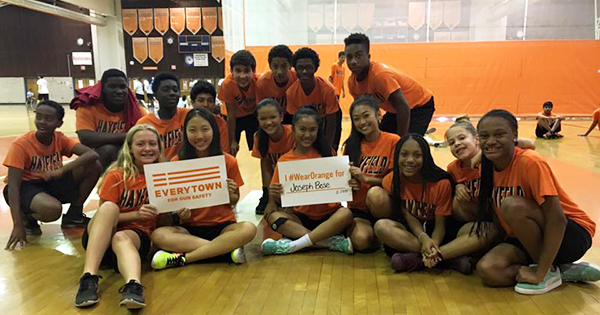 students have linked not only with gun control groups like Everytown for Gun Safety and Moms Demand Action, but also with large and powerful Resistance groups like the Women’s March, which is planning its own student walk-out day to protest gun violence.

The focus on the NRA also provides local activists a blueprint for their own organizing. Groups like Indivisible, already prepared for engaging in the 2018 elections, have been pressuring their elected officials to meet with their districts and explain their positions.

Adding the question of NRA support to the obstacles politicians must navigate is reasonably clear.

It’s unlikely to be decisive in some districts, but in many others, where modest gun control measures (bans on assault weapons; full background checks; ending the gun show loophole) are broadly popular, embattled incumbents will have to handle voters passionate about changing unpopular policies and politicians who support them.

This time, the Republican Party is led by a president who is particularly inept at expressing empathy or concern. Donald Trump’s jaunty Florida photo op (thumbs up!) surely made students madder, and the president would be crazy to meet with these kids, who are better informed and more articulate than he is.

A few Republican politicians will desert him, calling for modest measures and distancing themselves from the NRA to try to protect themselves–and maybe their students as well.

The kids from Parkland are tough and smart; the gun debate will test their endurance.

Over the long haul, I’d bet on the survivors.

3 Responses to Is this school shooting different? Teens take over!