#TimesUp at the Academy Awards

audience in the ten millions. The trick is to make sure the spectacle doesn’t drown out the cause, and the cause doesn’t crush the fun–too much. Activists pushing for action against sexual violence, harassment, and gender injustice more generally have a chance to exploit the large audience, and it can matter as long as the audience doesn’t feel exploited.

Sexual harassment and assault received unusual–and overdue–attention over the past few months, the result of smart activism exploiting staggering revelations of abuse.

In the last month, the clever and committed Parkland kids grabbed some of that attention for the ongoing problem of gun violence. I hope the #MeToo activists will recognize their efforts and issues as well.

When activists have a window of a few hours of national television time, the goal has to be to get the message out—clearly and sharply—without encouraging people to change channels. Activists also want to expand that window, getting people to tune into the movement before and after the big show.

Like overnight stardom, an effective protest takes preparation. In the weeks of publicity and awards campaigning already underway, the committed can promote the cause as well as their movies. Already equipped with a handy hashtag, supporters can tell their stories, and announce that there will be more action on Oscar night. Audiences are less likely to miss the message if they know something’s coming.

They can also work within the Academy of Motion Picture Arts and Sciences to make sure the host, Jimmy Kimmel, is on board. Maybe they can even get the Academy to announce new rules and standards for appropriate behavior (no “auditions” in hotel bedrooms off-hours?). At least the Academy can announce general support for an end to harassment and the start of gender equity.

Even before the event, actors can work to share their spotlight with the movement. Beyond naming villains, they can call out famous and less-known movement heroes. The Golden Globes provided a rehearsal; eight stars brought activists working for gender equity beyond Hollywood as their plus-ones, and on the red carpet talked about their guest and her work rather than a designer.  The basic black costumes at the Golden Globes also showed a clever innovation on the familiar cause lapel ribbons. It allowed attendees who didn’t have nominations to declare their support for #TimesUp without much effort, and made for powerful images. Organizers can go black again, design a ribbon or button, or try something new—a sash or hat. The point is to let large numbers speak without talking and push people to take a stance.

The Oscar ceremony is fundamentally about glamour and the movie business, as #MeToo must recognize. Activists have to work within the event. Long speeches that get drowned 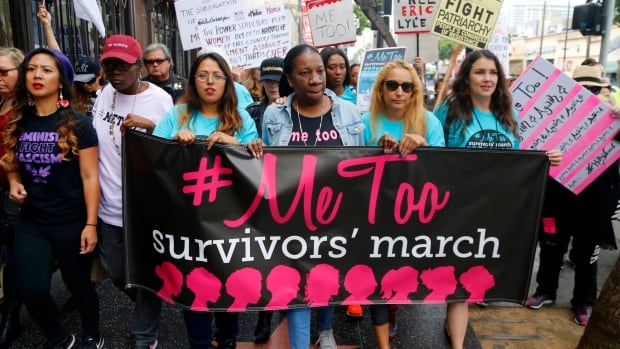 out by the orchestra as the cameras pull away don’t make for compelling politics or television. This means that the message has to be brief—a line or two, not a speech—but repeated throughout the evening. Those who get to make speeches can add a name or two to the lists of managers and agents who make victory possible. I’d hope that all the winners and presenters can “thank” an activist or two making the movement, while a chyron underneath or at least an available website provides links to groups. They can thank women who told their own stories, and people who supported them. Alyssa Milano, who started the #MeToo hashtag last year deserves recognition, and so does Tarana Burke, who started the pre-Twitter campaign in 2006. So does Moira Donegan, who kept a spreadsheet of allegations against Hollywood harassers. Of course, the exposure means more to Ms. Donegan or Ms. Burke, who do not have millions of Twitter followers.

Effective action means using the Oscars to help build something that spills off the big screen into real politics, part of a movement that continues the next day.