#MeToo Too, and the politics of the Kavanaugh nomination

But consideration of Judge Brett Kavanaugh’s nomination for a seat on the Supreme Court is about much more than this judge, his late adolescence, whether he dissembled about 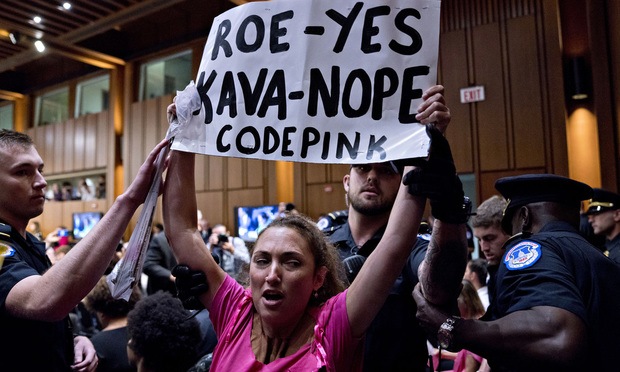 his conduct toward young women, or his efforts to get other conservative judges on the bench.

Social movements work to bring greater engagement to events they don’t always choose, much less create. When successful, they increase attention to the issues they care about. #MeToo didn’t pick the Kavanaugh confirmation as a battlefront, but its supporters couldn’t ignore it. And they weren’t alone: Christian conservatives now also see salvaging Kavanaugh’s candidacy as key to their larger efforts.

#MeToo made it a little less awful and scary for Christine Blasey Ford to go public with her story, and she’s paid a price for it already. But Professor Blasey Ford’s story–and particularly the attacks on her it generated–encouraged others to tell their own chilling tales of sexual assault–on Twitter, television, and around kitchen tables. #MeToo encouraged dogged reporters like Jane Mayer and Ronan Farrow to pursue whiffs of appalling behavior gleaned from odd emails, eventually convincing Deborah Ramirez to tell her story as well, even as she feared the personal costs.

To be sure,  a much larger number of women with far more extensive corroboration told stories about candidate Donald Trump–and he was elected anyway. But senators must cast their votes in public, and then face the voters, and people are watching.

Long before any of the allegations about young Kavanaugh were public, many Democrats were determined to oppose his nomination because of his political past, his judicial

decisions, and the importance of this swing seat on the court. They didn’t need sexual charges to motivate their attack, but once the charges were public, they were determined to use them. Allegations of sexual assault invite public attention in  a way that evasive answers about stare decisis won’t. Blasey Ford’s story, along with Ramirez’s–and who knows who and what else’s tale–reopen Judge Kavanaugh’s candidacy, and expand the scope of the questions he will have to face.

Given what’s now in public, a senator who takes “advise and consent” seriously should ask not only about the specific events detailed, but also young Brett Kavanaugh’s history with alcohol and with women. Those who look at Kavanaugh’s professional history investigating officials charged with sexual misconduct will find his memo to Kenneth Starr, outlining questions for President Bill Clinton, unavoidable. Truth: the language and detail is so explicit and detailed that I clutch when considering a copy and paste.  (You can look for yourself here.)

Activists are doing far more to make it hard for senators to ignore them and their issues. Some are calling their senators–or someone else’s. Others are giving money–or promising to give money–to candidates who support their positions. Reporters are looking at how Yale law professors think they can help star women students get prestigious clerkships with an appellate judge. (Note: It includes reviewing photos of potential interview outfits.)

And people are protesting!

The protests started before almost any of us knew about claims of sexual assault, and those who turned out were well-prepared to believe them, even as Kavanaugh’s supporters were rushing to dismiss any claims that might slow confirmation. The search for truth and the seating of a new justice should take more work. 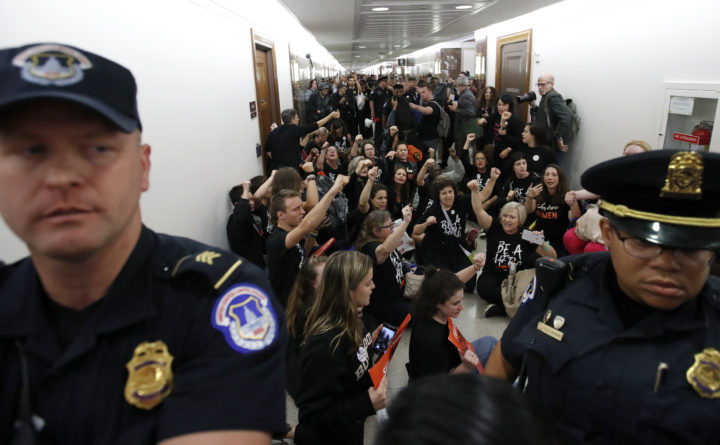 Protest polarizes, and most of us–and certainly most of the senators–have already committed to their side. Thus far, more information feeds the intensity of concern, and senators are digging in on their positions. Judge Kavanaugh’s fate will be determined by a few senators able to raise their heads and look at new information and changing politics. Some may have be able to reconsider their concerns about his jurisprudence on reproductive rights or tribal self-determination. Still others may see a chance to get a candidate for the seat they preferred in the first place (say, Amy Coney Barrett, who excelled academically outside the Ivy League, and is younger and more overtly religious). When two or three senators falter, Senator McConnell and others will orchestrate a way for Kavanaugh to self-righteously withdraw from consideration.

But however this vacancy is filled, the larger struggle is represents will continue. At minimum, presidential vetting of judges will include questions about sexual assault–and youthful drinking–that, I bet, never came up before. But more is possible: if young men worried about how their behavior at parties might compromise their ambitions decades later….well, would that be a bad thing?

2 Responses to #MeToo Too, and the politics of the Kavanaugh nomination