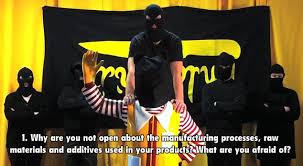 The Food Liberation Army, a new activist group in Finland, took a statue of Ronald McDonald hostage, demanding that the McDonald’s corporation answer a series of questions about how they produce and serve their food.   The online demand, a kind of ransom note, starts:

We love burgers, fries and McDonald’s, but we can no longer watch silent when the food we love is being destroyed and brought to shame because of greed and indifference. Because of your short-sightedness your burgers have become nearly inedible.

That is why we want to help McDonald’s to save food. We made you a list of questions we want you to answer. We hope that your answers will make you understand the dilapidation of the food culture we love and the appropriate measures.

When McDonald’s refused to engage with them, they executed the plastic statue by

guillotine. You can see some satirical videos on their website.

The Mckidnapping is the first action by the group, but the website expresses very broad aims:

As citizens we have lost faith in the political system and its values; politicians who are allowed to do anything and still remain in power. As consumers, we are tired of making a difference by our purchasing decisions, as well as faceless companies whose only value is money. We want our lives back.

We gathered a group of people who think alike.
And Food Liberation Army was born
It has a simple task:
To liberate man from systems bigger than him or her.
Fight the power where the power does not belong.
Return decisions on our own lives back to us.
To move from words to deeds.

Satire can be powerful.  Activists stage events to get attention for themselves and their causes, to bring their ideas to the larger public, and to activate people who might agree with them.  And McDonald’s, big, rich, and everywhere, is an obvious target. But how does satire work?

Morgan Spurlock’s film, Supersize Me, covered the nutritional issues of fast food in an entertaining, polemical, and disgusting way in 2004.

McDonald’s responded by issuing a series of statements that explained that their sandwiches could be part of a healthy diet, as long as you didn’t eat them every day.  They eliminated the supersizing pricing promotion (more food for not much more money), emphasizing that they’d been planning to do so anyway.  (We should always be suspicious when the targets of activism repeatedly emphasize that they are not responding to it, particularly when they change policies.)  And they put up a very informative website which allows anyone to calculate the nutritional value of a Mcmeal online.

The Food Liberation Army is talking about nutrition, but also fair labor practices and sustainable agriculture.

Author and professor of Sociology and Political Science at the University of California, Irvine
View all posts by David S. Meyer →
This entry was posted in Uncategorized and tagged food, humor, McDonald's, media. Bookmark the permalink.