Anger, Organization, and the Myth of Spontaneity

When protest explodes/emerges/erupts/ after a politician does–or threatens–something unappealing, we talk about the unrest as a response.

So, we saw disruptions at town meetings across the country in 2009 about President Obama’s health care reforms, and we saw large demonstrations and strikes across Wisconsin targeted at stopping Governor Walker’s efforts to strip unions of the right to bargain collectively.  These were, of course, people responding to policies they viewed as threats.  (Note that activists on the left and right shared a slogan: “Kill the Bill.”)

But there’s a step missing in thinking about how they happened; organized groups worked hard to mobilize those people.

FreedomWorks invested a great deal of time, money, and effort in stoking, scripting, and publicizing the town hall protests, and trade unions in Wisconsin, rightly viewing Governor Walker’s policy as a serious threat to their future, mobilized their base to protest. 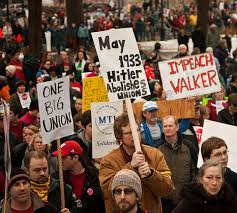 This doesn’t mean that either protest was illegitimate, or that the people who appeared to chant and hold signs didn’t believe what they were saying.  It also doesn’t mean that everyone attending either set of events was directly mobilized by one of those organizations.

Rather, organized groups plan and publicize events, and activate all their available networks to turn people out.  They define grievances, and try to get people to agree with them enough to turn out and participate.  And, when the events take place, they work hard to get their messages about what they mean out to a larger public.

Activists are often quick to identify the organizations at work in causes they hate.  We heard supporters of health care reform call out FreedomWorks and the big corporate money behind the town meeting campaigns.  And we heard Governor Walker and his allies dismiss the Wisconsin protests as bought and paid for by big labor.  (There’s an unfortunate–and widespread–misconception that legitimate protest, whatever that means, is spontaneous and unorganized.)

They’re both right–at least partly.  The large protests don’t happen without organizing, and a serious investment of time and skill–and often money, spent in convincing people that something was wrong, that it could be different, and that their efforts might matter.  They also wouldn’t happen, at least not on a large scale, if lots of people weren’t convinced.

This is, by the way, my gripe with Frances Fox Piven (very different, by the way, from Glenn Beck’s accusations, discussed most recently here).  Last December, Piven published an article in The Nation, worries that the failure of the unemployed to protest extremely high and sustained joblessness will allow politicians to ignore their plight, or even to adopt policies that hurt employment generally and workers in particular.  (She’s right about this.)

So where are the angry crowds, the demonstrations, sit-ins and unruly mobs? After all, the injustice is apparent. Working people are losing their homes and their pensions while robber-baron CEOs report renewed profits and windfall bonuses. Shouldn’t the unemployed be on the march? Why aren’t they demanding enhanced safety net protections and big initiatives to generate jobs?

Piven then identifies many of the obstacles to organizing and mobilizing the unemployed (e.g., they’re spread across the country and industries; people blame themselves and try to find individual solutions), but then neglects the organizing that needs to take place for such protests to emerge.  Indeed, she concludes:

A loose and spontaneous movement…could emerge. It is made more likely because unemployment rates are especially high among younger workers. Protests by the unemployed led by young workers and by students, who face a future of joblessness, just might become large enough and disruptive enough to have an impact in Washington. There is no science that predicts eruption of protest movements….We should hope for another American social movement from the bottom—and then join it.

But hoping won’t make a social movement about unemployment or anything else, and–in real life–Frances Fox Piven knows this perfectly well.  Even as she’s emphasized spontaneity and unpredictability in much of her academic work, her treatments of movements identify the contributions of organizers dedicated to mobilizing people.  And, in her real life, she’s spent a great deal of time and effort building organizations to do exactly that, working and organizing more than just hoping.

Waiting for conditions to create movements lets the other side–whoever that is–organize and win.

So, Slate’s David Weigel observes that liberals have been slow to organize against Rep. Paul Ryan’s budget proposal, supported by all but four Republicans in the House of Representatives.  Ryan’s budget, which would cut taxes for the rich, reduce government spending massively by cutting unnamed programs–but not defense, and turning Medicare into a voucher system.  Contrasting the relatively small crowds at the meetings hosted by members of Congress returning to their districts with the health care shout-downs, Weigel thinks the Democrats are missing an important opportunity, perhaps relying naively on the offensiveness of the policies themselves to generate protest.

There are some suggestions that organizations on the left get the message.  The Service Employees International Union (SEIU) is planning a national campaign to “Fight for a Fair Economy”, spreading Wisconsin-style protests across the country.

On Wednesday, April 27th, when members of Congress are home for recess, we’re going to their offices all around the country to demand they prioritize jobs over budget cuts. We’re going dressed for an interview, briefcase in hand, with our resumes to show we’re ready for work, but the opportunities just aren’t there.

Author and professor of Sociology and Political Science at the University of California, Irvine
View all posts by David S. Meyer →
This entry was posted in Uncategorized and tagged Frances Fox Piven, health care, organization, town meetings, unemployment, Wisconsin. Bookmark the permalink.

1 Response to Anger, Organization, and the Myth of Spontaneity