When US forces killed Osama Bin Laden, they dramatically shook up domestic politics in the United States, but, really, nothing has changed.

For the Tea Party, having President Obama announce Bin Laden’s death is an extraordinary stroke of bad luck.   The Tea Partiers hadn’t devoted much attention to the incredibly divisive politics of national security–for obvious reasons.  Libertarian Tea Partiers distrust the extending reach of the Federal government altogether, and chafe at the sorts of surveillance authorized by the Patriot Act.  True deficit hawks (and there are few of them in Congress) can’t really look away from the hundreds of billions spent annually on the military, and can hear the meter running on the costs of wars in Afghanistan, Iraq, and now Libya.  But the Tea Party also includes what used to be mainstream Republicans, who support the military and a global leadership role for the United States.  (Rep. Paul Ryan’s budget left defense spending untouched.)

Killing Osama Bin Laden does nothing, really, about any core issues for the Tea Party:  jobs in the United States, taxation, the deficit, regulation, abortion, immigration, same sex marriage, and on and on.  It does, however, suck up the political and media space available for talking about those issues. 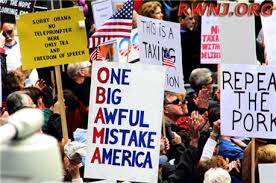 competent, successful, confident, and powerful.  Republican allies in Congress recognize this, even if everyone at the grassroots doesn’t, and this will influence how hard they bargain on, say, raising the debt ceiling.  (Democrats expect the president to be tougher than he’s been in the past as well.)

Antiwar activists are trying to use the killing to reinvigorate their case against the war/s.  In today’s LA Times, for example, Tom Hayden argues that this victory shows that special forces are more effective than conventional military engagement in dealing with terror, and that this achievement gives the president the “opportunity” to get out of all the current wars which, he believes, are wasteful, destructive, and counterproductive.  But, aside from the tribute to the special forces, Hayden has been making exactly the same argument for years.  Bin Laden’s death is just another news peg to tie it to.

And Hayden isn’t alone here.  Congressional opponents of the

wars, mostly Democrats, but including Republican Rep. Ron Paul, are strategizing about how to take advantage of the moment, while Moveon.org is circulating an online petition to end the war.

Activists have to respond to the events that fortune throws at them, and luck sometimes matters more than skill.  But events can be an excuse as well:

pay-per-view cable television concert to establish himself as a music superstar.  Alas, some potential viewers tuned into the mesmerizing slow motion police chase of O.J. Simpson driving a white SUV on California highways.  Maybe, with nothing so interesting available for free on tv, they would have paid

up to watch Hasselhoff sing instead.

And maybe the successful strike against Osama Bin Laden will get the credit for landing a body blow against a Tea Party that was already floundering.

Author and professor of Sociology and Political Science at the University of California, Irvine
View all posts by David S. Meyer →
This entry was posted in Uncategorized and tagged Obama, tea party. Bookmark the permalink.