Can you keep the grass(roots) growing when you take it inside?

Judson Phillips, founder of the for-profit Tea Party Nation, has announced that he intends to take a salary out of the organization.  Tea Party Nation has produced a couple of national convention events (and some failed efforts) and some pithy quotes from 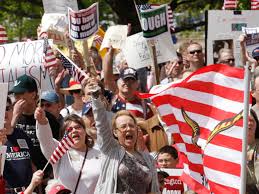 Phillips in the media–but not so much else in the way of activism.  But the trend toward professionalism (paid activists!) is well underway in the Tea Party movement–and in American social movements more generally.

Establishing a group of people who can live off (rather than just for) a movement (this is Max Weber’s formulation) can be an immense asset for a movement.  The professionals worry about organizational survival, funding, and exploiting the opportunities of the moment.  They produce better materials, updated more frequently, are available to media for comments, and think about not only the campaign of the minute, but also the long term goals of a movement.  They are generally able to develop more expertise in at least some of these things than amateurs engaged in a movement for love of cause.

At the same time, the professionals have to think about all of their efforts professionally, not getting carried away by the exigencies and rivalries of the moment.  They don’t want to burn bridges with funders or politicians who are giving them trouble at the moment; they may be able to go back to them later.  And they have to think about the consequences of the issues and strategies they employ.  As a result, they tend to be more attracted to easily repeatable tactics (lobbying, rather than demonstrations; negotiations rather than confrontations, etc.).

Professionalized organizations can survive at the expense of the movements that created them, but then, once established, can provide the organizational core and and institutional expertise that animates a movement when circumstances are more favorable.

Now, what about this Tea Party?

The broad Tea Party movement was based in longer-standing organizations (especially FreedomWorks and Americans for Prosperity), run by political professionals and supported by well-heeled funders, including the Koch Brothers.  This meant that when there was the potential to mobilize a populist conservative movement, conservatives had already assembled the ideas, expertise, and infrastructure needed to do so.

It also means, however, that the funders and professionals may prioritize their concerns at the expense of those mobilized at the grassroots.  The proto-Tea Party groups aren’t vigorously anti-immigrant or willing to prioritize social conservative issues at the expense of their economic and regulatory goals.  That’s not the case at the grassroots.

The grassroots has to support and trust their professionals, but not blindly, aware of all the attendant risks.

What do you think of Keli Carender’s career?  An underemployed teacher and improv comic, she started the Redistributing

Knowledge blog just after President Obama took office.  Adopting the persona, “Liberty Belle” (on the right), Carender blogged against Obama, government in general, and health care reform in particular.  She also organized, theatrically and effectively, in the Pacific Northwest.

Spotted by the talent scouts in FreedomWorks, she was flown from Seattle, Washington (grassroots) to Washington, DC, for activist training.  The training took, and she is now a professional, employed as a staffer at Tea Party Patriots.

As near as I can tell, Carender’s wit and vigor are in no way compromised by the development of her professional career, and she can now devote herself to the cause full-time, without worrying about another job for money.  But she is no longer a part-time math teacher drawn to the political arena by the extraordinary threat Barack Obama represented to her.  She is now a professional managing a career as a well as a movement, and those goals may not always line up.  The question is whether her judgments about the most critical issues and how to pursue them will diverge from the grassroots she grew out of.

Author and professor of Sociology and Political Science at the University of California, Irvine
View all posts by David S. Meyer →
This entry was posted in Uncategorized and tagged Americans for Prosperity, FreedomWorks, Judson Phillips, Koch Brothers, professionalization, tea party. Bookmark the permalink.