A movement is a market

Every year when I do my taxes I go through my credit card receipts looking for deductions for work and charitable contributions.  In the past few years, I’ve found a disturbing number of payments for “Justice.”  The payments are disturbing because Justice is a store that sells in clothing for preteen girls.  (Note to IRS: I know these charges are NOT deductible, and have never claimed them.)  Money spent on Justice doesn’t actually promote any vision of justice.  It does, however, promote fashion.

The Justice fashion is all about using the peace symbol on colorful clothing, often accompanied by words like “peace” and “joy.”  It’s hard to quarrel with the style or the sentiment, but I can’t imagine that many of the girls trundling off to grade school each day

realize they are wearing a symbol commissioned by the British Campaign for Nuclear Disarmament to promote its efforts against nuclear weapons.  A symbol deeply tied to a political viewpoint became a style to sell products, supporting a company, but not a cause.

Social movements promote ideas.  They talk, sing, chant, buy ads, and hand out flyers.  They post opinions on websites, and encourage others to consider their opinions.  Activists write books and articles and try to get people to read them.  Activists wear buttons and tee shirts with slogans, and sometimes even carry placards.  Organizers sell the buttons and tee shirts (it’s also one way to make money for the cause), but they also give them away to promote the ideas.  They hope the style promotes the movement and the ideas.

Ultimately, however, the apparel business requires different skills and focus than political organizing, and they have to be more concerned with the popularity of the style than whatever meaning is designers intend to promote.

Entrepreneurs pick up the symbols of a movement when they think it will be profitable.  Every great symbol or slogan can become someone’s business.

And there are businesses that make money by serving movements, making tee-shirts and buttons and bumper stickers.  (Here’s one from the left:  http://www.donnellycolt.com/catalog/core.shtml.)  But they don’t make money unless they serve a market–and themselves. 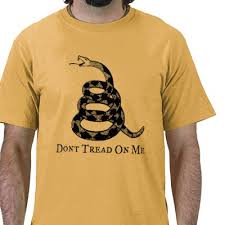 The Tea Party has appropriated symbols of the American revolution, the Constitution, and patriotism in general, grafting them onto activists’ current concerns.  This makes for a colorful and dramatic movement.  It also creates (and demonstrates) a market for a set of symbols safely in the public domain, providing an immediate boost for business.  And entrepreneurs have responded, producing shirts and buttons and mugs and more, and offering them for sale at a hefty mark-up.

Given the diversity and the range of issues running around inside the Tea Party, plus the

unabashed enthusiasm for free enterprise, we’d expect that market to develop more quickly and fully than those of movements around, say, climate change.  On the left, there’s some shame and rationalization about making a living off this.  There should be no reason for similar reluctance on the right.

Does selling the movement mean selling it out?

Author and professor of Sociology and Political Science at the University of California, Irvine
View all posts by David S. Meyer →
This entry was posted in Uncategorized and tagged business, CND, culture, money, nuclear disarmament, tea party. Bookmark the permalink.

1 Response to A movement is a market