Mass arrests on the Brooklyn Bridge are a good way for a protest campaign to break into mainstream media nationally.  Although 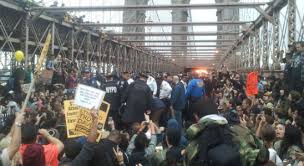 But upwards of 700 arrests near a national landmark is newsworthy everywhere.

And here’s the dilemma for activists: conflict, drama, celebrities, and novelty make news.  Alas, it generally doesn’t make for coverage of issues, and the things demonstrators do to get noticed may not bring them the kind of attention they want; they may look foolish, provocative, or deviant.  But polite, informed discussion of important issues by regular people isn’t so interesting to cover.

In one way, the New York Police Department’s mass arrest did the emerging Occupy movement a favor.

So, who was responsible?

But it’s also very easy to find other videos on line that show police officers appearing to lead demonstrators into the roadway.

Watch a few videos and you’ll probably conclude, as I did, that police warned demonstrators and that many demonstrators thought they were following a safe demonstration route and received no warning of impending arrests.

These days, most large demonstrations are negotiated, even choreographed, in advance by the organizers and the police.  They permit locations, arrange for sound, and even identify zones where protesters can be arrested.  The leaderless Occupy Wall Street group hasn’t been negotiating with the police, and the open source ethos has allowed many competing messages to flourish within the ranks of the protesters.

Author and professor of Sociology and Political Science at the University of California, Irvine
View all posts by David S. Meyer →
This entry was posted in Uncategorized and tagged arrests, Brooklyn Bridge, media, protest, Wall Street. Bookmark the permalink.