University and college student protest returned yesterday (here and here).  Across California, at UC, Cal State, and even some high school campuses, students protested tuition hikes and program cuts, even as schools are raising tuition and cutting programs everywhere.  Now, the student protests are called “Occupy.”

You can see the broad trend in tuition below (from the College Board):

But it’s worse than this.  In public institutions, tuition hikes are accompanied by cuts in services, courses, and faculty, resulting in a, uh, compromised, educational experience.  Students who are working more hours off-campus to fund their educations are finding themselves closed out of classes they want or need, sitting in more crowded lecture halls, navigating reduced library hours and offerings, and seeing greater personal debt and dimmed career prospects on the horizon.

Access to high quality education, higher and otherwise, is a core equal opportunity issue.  Whatever Senator Rick Santorum says about snobbery or liberal professors indoctrinating youth, young people with college degrees are less likely to be unemployed than those without them; they’re still likely to earn more money and enjoy more stability as well.  (Of course, it’s worse for college grads than it used to be.)

When Occupy left public parks, usually not by activist choice, it spilled out into the range of issues and arenas that organize American life.  “Occupy” provided the language for a wide range of campaigns to reduce political and economic inequality.  The campus-based 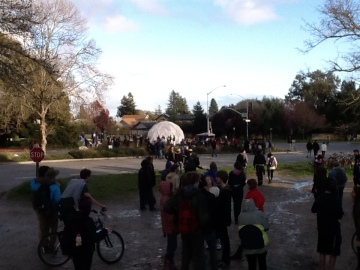 protests yesterday aren’t anything new, but framing them as part of a larger campaign for justice and reform is.

In Santa Cruz, Occupy turned out hundreds of students, made some interesting pictures, and canceled many classes.

Across California, the LA Times reports, turnouts were vigorous, but relatively small.  It’s a little early in the tuition hike cycle for student protests to take-off.  The challenge for Occupy is to find ways to inspire larger numbers of people to take up specific parts of the cause in the places they know best: housing, finance, work, and certainly, education.  The promise is of a multi-faceted, diverse, and powerful movement.

The risk is that these diverse efforts fail to generate the inspiration and attention of the Occupations.

Author and professor of Sociology and Political Science at the University of California, Irvine
View all posts by David S. Meyer →
This entry was posted in Uncategorized and tagged California, education, inequality, Occupy, Rick Santorum, university. Bookmark the permalink.