In the weeks that Occupy Wall Street created a protest village in lower Manhattan, activists put together a lending library of more than 5,000 volumes.  When the police cleared the demonstrators out of Zuccotti Park, contractors hauled all of the stuff that remained away, including the library.

The books weren’t burned, but the the haulers treated the volumes like trash.  Of course, there were also computers and cameras, tents and blankets, and bicycle generators, but the pictures of the library in pieces 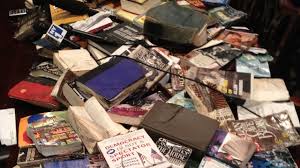 in a dumpster provided some of the more disturbing images from the eviction.

Occupy’s librarians sued the City of New York for damages, and yesterday the City settled, making a payment of $375,000.  (Read the settlement agreement here.)

Not quite an apology, the City issued a statement:

The City will make payments to several groups of Occupiers for damage to their property, but just about half of the total will go to the lawyers who filed the case.

There’s got to be some point there.

For New York City, $375,00 is a relatively small price to pay for ending the litigation.

For the rest of us, this is a good chance to consider the paradox of political openness in America.  Demonstrators camped out in a tiny private park in the middle of the City, and then were summarily evicted, their property destroyed within minutes.  Yet the evicted were able to hold the City responsible for the property destruction, once they were able to enlist lawyers on their behalf.  More than a year after the eviction, Occupy Wall Street is once again in the news.

I haven’t been able to find a source on how the non-lawyers will use their settlement money.  Presumably, they’ll put it back into the cause in some way.  Although even half of $375,000 seems like a lot of money to most of us, we need to remember that this is in the context of a politics where a billionaire casino magnate can contribute $100,000,000 to candidates for office.