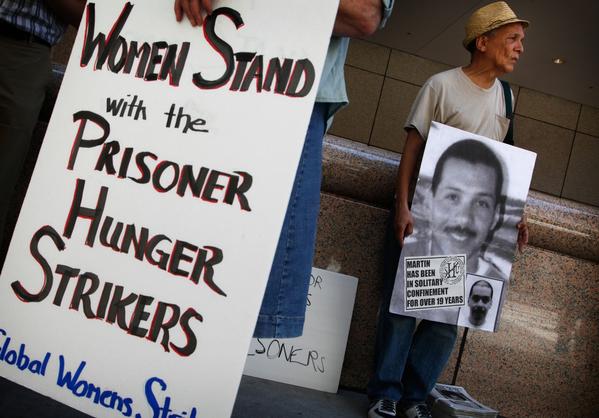 An astonishing 30,000 prisoners in California prisons have refused meals.  The Corrections Department doesn’t call it a hunger strike until 9 meals have been missed, but what’s going on is pretty clear.

A hunger strike reflects commitment and desperation; prison inmates have very little leverage in influencing the decisions that affect their lives.  California prisoners have employed the tactic recurrently in recent years.  Immediately, the inmates in 10 other prisons are supporting the ongoing campaign of inmates that the super high security Pelican Bay facility to limit solitary confinement to five years.  (five years!)  But California inmates have other grievances: they want education and rehabilitation programs; they want decent medical care; they want less crowded prisons.

A panel of Federal judges agrees with them.  An appellate court has ordered Governor Brown to reduce the population held in California’s prisons.  Governor Brown, no political neophyte, knows releasing nearly 10,000 prisoners on relatively short notice is bad politics; he also knows that paying for adequate housing and health care is bad for the budget.  Governor Brown has delayed and appealed repeatedly, hoping for a win that seems unlikely, but he’s been able to stall reform for years.  The inmates are doing what they can to try to enter the debate.

The crisis in California prisons is real and has been a long time in developing.  Since the 1970s, ambitious politicians have learned that proposing harsher treatment of criminals, particularly longer sentences, was potentially helpful and politically unassailable.  The voters joined in, passing a Three Strikes law, mandating life imprisonment for the third

felony conviction, by referendum in 1994.    California has also historically posted the highest recidivism rates in the nation, with more than 70 percent of released prisons returned to prison within three years.  So, California prisons are overcrowded, filled not only with dangerous and violent felons, but also sickly geriatric prisoners in need of health care; the prison system is inadequate and extremely expensive, crowding out spending for programs that provide more direct benefit to most Californians.

Convicted felons in prison have little say over any of this, and those that do–elected officials and voters–are generally not very sympathetic to the prisoners.  The hunger strike doesn’t have much of a chance of influencing the debate and refocusing attention, but it’s the best chance the inmates have.

By refusing meals and work, California’s inmates are trying to remind everyone else in the state of their existence.  Skipping the first few meals is painful, but after a few days, hunger apparently disappears, then strength follows.  I’m not aware of any hunger strike that has mobilized 30,000 people in a fast.  Whether Corrections officials deem it a hunger strike today or not, be sure that they’re trying to figure out a strategy to handle massive non-cooperation, hoping that they can avoid both force-feeding and inmate fatalities.  If even half of those who started continue on, any strategy will be unlikely to succeed.

Author and professor of Sociology and Political Science at the University of California, Irvine
View all posts by David S. Meyer →
This entry was posted in Uncategorized and tagged California, Corrections, courts, hunger strikes, inmates, Jerry Brown, Pelican Bay, prisoners. Bookmark the permalink.