Zimmerman, Martin, and the Courts

Don’t count on the courts to produce justice, but sometimes it’s disappointment with the legal system that does make change.

We expect too much from the courts and we’re constantly disappointed.  The trial in

Florida could have ended with George Zimmerman sanctioned in some way for shooting and killing an unarmed teenager; a court could have given him a long prison sentence.  It didn’t end up that way.  Pundits can argue about whether the verdict was appropriate legally, even if not morally, but it’s clearly not enough.

Even under different circumstances, that court couldn’t do anything about:

a hollowed out public sector which leads to the proliferation of untrained but armed amateur police patrols;

the availability of firearms;

the practice of racial profiling;

the fear of crime.

Even worse, if horrifically obvious, no court can undo the damage done.  A civil suit may later lead to a financial judgment that garnishes Zimmerman’s earnings for the rest of his life, but that doesn’t bring back the child. 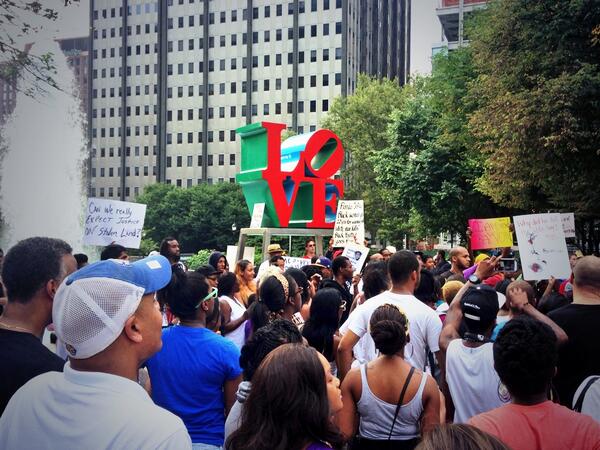 system is all about containing and managing disputes, filtering out politics and larger issues.

The legal system may not yet be done with George Zimmerman.  The federal government could file civil rights charges; the Martin family can file a civil suit for wrongful death.

All that is far less important than the larger causes.

In the wake of George Zimmerman’s acquittal, frustrated and angry people have tried to find ways to channel their efforts.  Activists, supported by the NAACP and Moveon.org are pressing the Department of Justice to prosecute Zimmerman for civil rights violations.  There’s a petition you can sign.

Some activists have tried to raise money for Trayvon Martin’s family.  Money is no substitute for a son, of course.  It’s just what they can do; it’s not a very good way to say you care, but it’s a way, and it may be the best they can do.

There have been vigils and rallies and protests across the country, mostly very peaceful and sad.  In Oakland, however, demonstrators have broken windows, set fires, and clashed

with police.  It’s part of a longer story there.

What happens in these painful days is less important, ultimately, than what happens in the weeks and months that follow.  The criminal justice system generated this verdict, an unsatisfying judgment about an awful event.  It becomes something more only if activists are able to shift focus from the courts to the less contained and even more difficult world of politics, turning the killing into a catalyst for policy reforms on guns or public services or racial profiling.

Note: this rarely happens.  Neither the acquittal nor the subsequent conviction of the police who beat Rodney King led to changes in police policy nationally–or even in LA.  (Correct me, please, if I’m wrong on this.)  The frustrations over O.J. Simpson’s acquittal didn’t lead to better protections for women seeking protection from stalkers–even famous ones.