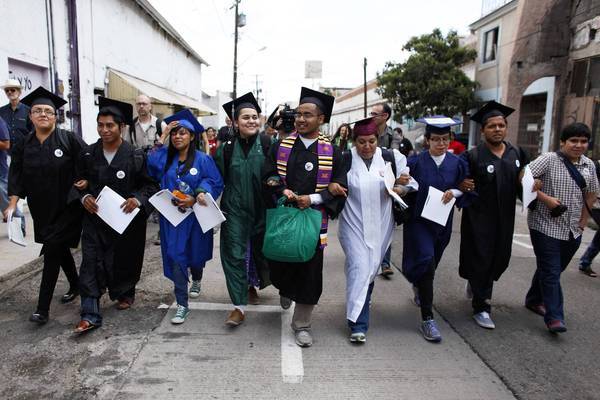 In this regard, the immigrant rights movement isn’t very different from virtually every other social movement in recent American history.

While I’ve been awed by the bravery and commitment of the DREAM 9, subjecting themselves to arrest and potential deportation in the service of dramatizing the need for comprehensive immigration reform, others involved in the struggle for a very long time were less enthralled.  At the LA Times, Cindy Carcomo has the story of divided opinions among immigration rights activists.

Civil disobedience here is risky and it’s polarizing, and it’s unlikely to do anything over the short and medium term to affect the balance of power and commitment in Washington, DC, meaning mostly the US Congress.  Carcomo cites Dave Leopold, an immigrant rights lawyer, who says the efforts would be better directed at pressuring House Speaker John Boehner.

How?  Not so clear, but there’s a hint elsewhere in the Times.  A front page story reports that a liberal group, America’s Voice, has been donating money to support South Carolina Senator Lindsey Graham’s reelection bid.  Senator Graham is a conservative Republican who supports international military engagement and comprehensive immigration reform, that is, not conservative enough to head off a Tea Party-ish primary challenge.  Pragmatic politics?  Foolish compromise?

Advocates of immigration reform will differ on shorter term demands, tactics, and strategies of influence; they’ll also differ on longer term goals.  And they won’t be able to stop those allies they disagree with from pursuing approaches they view as foolish or counterproductive in the first place.  Remember, immigrant rights activists were initially reluctant to allow the DREAM Act, what seemed like the most tractable piece of their broader agenda, to be carved out from a comprehensive bill.  But they couldn’t stop the DREAMers.

Social movements in America do not easily submit to anyone’s control, even that of long time activists.  Made up of multiple groups and individuals who drift in and out with a range of ideologies and resources, movements develop idiosyncratically as leaders frantically try to cultivate cooperation and coherence.  And the immigrant rights and reform struggle is just another example.

Remember that gay and lesbian activists divided over the wisdom and value of a strategy based on access to marriage.

And that the early Tea Party groups were supported by well-funded national groups that mostly supported an open approach to borders and immigration.

Now marriage equality is the prime front in the gay rights struggle and Tea Partiers–if not all the national organizations–are on the front lines fighting immigration reform.

America is an entrepreneurial environment for social movement activists, and groups and leaders have a harder time establishing monopoly control of a movement than companies do in markets.

Movement strategy emerges from competition, as organizers try to get support from activists, funders, and authorities, while they try to convince, cajole, and contain their allies.

It’s complicated to watch, and more than that to try to coordinate.