Without cape and tights, Congressman John Lewis is becoming a comic book hero.  (He’s already a hero of mine, and some of his exploits have appeared in this blog.)

From a piece by Sheryl Gay Stolberg, at the New York Times, I learned of a new comic (they call it a “graphic novel,” but this story is true, not fictional) depicting Lewis’s life in three volumes.

By day, Lewis is a long time Democratic congressman from Atlanta, wearing a coat and tie, casting votes and making speeches–not generally the stuff of comic book heroism.

But Lewis is also a crusader for civil rights and social justice.  He was Executive Director of the Student Non-Violent Coordinating Committee (SNCC) in the early 1960s, a Freedom Rider, non-violent warrior, and a frequent civil disobedient.  His superpowers include extraordinary moral clarity and physical courage.  It won’t take you thirty seconds to find pictures of John Lewis, as a young divinity student or older member of 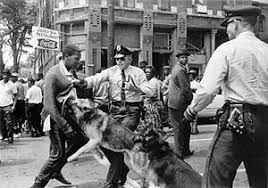 Congress, braving fire bombers or police dogs, or just being hauled away in handcuffs.

Even quicker, you’ll be able to find his Congressional website which details his positions and activities on behalf of the poor and disadvantaged generally, the environment, and civil rights for gays, lesbians, ethnic minorities, immigrants, and generally anyone excluded from some of the benefits of American life.

Representative Lewis has told his story before, in a more conventional memoir of the civil rights movement, in talks before activist audiences, and in speeches on the floor of the House of Representatives.  He constantly reminds his audiences that he is fighting the same fights for social justice in mark-up sessions and committee hearings that he fought on the Edmund Pettus bridge nearly fifty years ago.  And he still takes his politics outdoors as well. keeping civil disobedience in his personal tactical repertoire, even since entering Congress.

Even educated Americans take the story of civil rights in America so much for granted that they actually know little of it.  Among the many very bright and well-educated students I encounter at the University of California, Irvine, I’ve met only a few who had heard of John Lewis.   Most know of two civil rights heroes: Martin Luther King, Jr. and Rosa Parks.  Neither is now around to continue the struggle, their heroism and activism safely now confined to the past.

(Part of what I teach is John Lewis and his story of taking a political struggle into mainstream institutional politics; this is a story, in part, about social change and the resilience of American institutions.)

History is another site of struggle for activists, who need to work hard to claim credit for their achievements in the past and the connections to current struggles.  The graphic memoir (comic book) here becomes another activist tool and tactic.