April 15 is a great day to stage an anti-tax protest.  Federal taxes are due, forms are 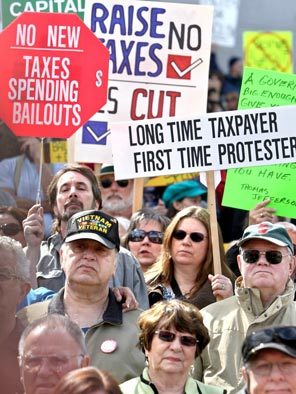 complicated, and many people procrastinate.  Few of even the strongest supporters of a strong well-funded government are enthusiastic about filling out forms and writing checks.  Noticing and amplifying the resentment to filing and paying, anti-taxers often exploit the moment of attention that Tax Day provides.  Indeed, the Tea Party first visibly emerged through a series of demonstrations on April 15, 2009.  The Tax Day protests were a chance to protest against not only taxes, but debt, and all kinds of government spending.  But not this year.

Subsequent Tax Day protests never matched the numbers, energy, and visibility of 2009.  This year, Tea Party groups aren’t even trying.  A quick search of the major national Tea Party groups shows no planned protest activities.  These groups have found other ways to represent their concerns, including pouring money into the elections coming in seven months.

But opportunities aren’t always one-sided.  Groups with very different concerns are using 2014’s Tax Day to try to make their own splash.

In Winston-Salem, North Carolina a lesbian couple (legally married in New York) brought cameras to the post office to file a joint return that the state government has no interest in accepting.  This is part of a national campaign.

In New Jersey, protesters are using Tax Day to challenge what they describe of Governor Chris Christie’s use of state funds to build his own national reputation.  They’re talking about bridges and traffic as well.

In San Francisco, tenants rights activists are campaigning against evictions.

Retired public employees in West Virginia are turning out to protest the size of their pensions.  They want a tax exemption on their pensions which, they say, haven’t increased in decades.

Others are trying to use the day to draw attention to military spending and tax justice, and even war more generally.

I’d be surprised if any of these efforts match the feeling of a national wave that accompanied the Tea Party five years ago.  The larger point, however, is that people with a cause prospect for opportunities to press their claims–and April 15 often seems like the right time.