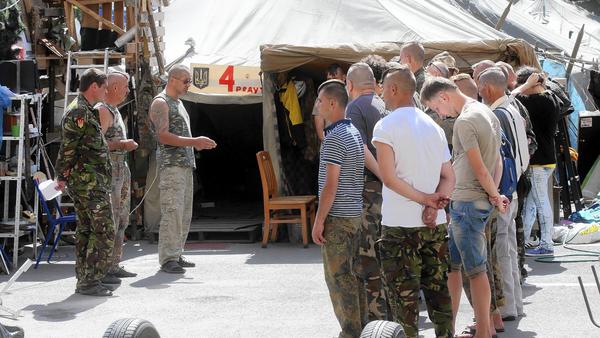 They’re still there.  At least some of the protesters who toppled Ukraine’s president Viktor Yanukovich months ago never left the Maidan, Kiev’s public square.  According to Steven Zeitchik’s report in this morning’s Los Angeles Times, the overwhelming majority of  the hundreds of thousands of citizens who protested last fall, often in violent clashes with the police, left when Yanukovich fled and an interim government was established.

Likely most went back to their homes and the rest of their lives.  Some opted to continue the battle elsewhere, mobilizing to defend Ukraine in the East from Russian sympathizers.  But hundreds (maybe thousands, says Zeitchik) remain in tents, ostensibly to ensure that the revolution continues–although they disagree on just what this means.  Most of the residents of Kiev see the tents as a disruptive and dirty eyesore, but given the recent history in Maidan, the government will not martial force to clear the occupiers out.

The Occupiers usually don’t get such grace notes from the governments they fail to topple (e.g., Zuccotti Park) or even those they do (Tahrir Square).  When it no longer seems practical or effective to occupy, protesters redirect their efforts and their lives.  [Of course, government can hasten the reoccupation by clearing protesters out with force.]  Some move back to private life, work, school, gardens.  Some keep at politics, moving into other efforts.  In the United States, Occupiers fanned out to a variety of causes, including protecting the environment, protesting student debt, and stopping foreclosures.  In Egypt, some of the Tahrir veterans organized to enter government–or help their allies do so.

Much of any movement’s important work takes place between the dramatic instances of protest that capture the headlines and the imagination.  It’s the prose of politics that generally ends up being more significant than the punctuation marks of visible protest.  On the day after the occupation, someone has to pick up the garbage and staff the public schools.  When a government doesn’t fall, as in the United States, it can feel, uh, same as it ever was.  When it does, activists need to figure out whether to pick up the trash bags or to monitor and pressure those who do.