We try to take control of the past with current struggles in mind.  Martin Luther King, killed less than a half-century ago is a prize for contemporary activists.  The civil rights movement isn’t quite a wispy memory from the era of Mad Men; some of King’s allies and opponents are still around, making it just a little harder to make up stuff.

But not just that: Selma, a movie about the dramatic struggle for Voting Rights that ran across the Edmund Pettus Bridge, has been in the news as a subject for historical debate.  The movie portrays King, and especially local activists, as heroes who dragged Lyndon Johnson into support for voting rights.  Johnson is portrayed as an antagonist who set J. Edgar Hoover and the FBI loose on King.  Not all of this is strictly accurate; Johnson supported civil rights by this time, albeit in far more measured and careful way than the extraordinarily brave men and women who marched, non-violently, into beatings by the police.  (And Johnson was hardly calling the shots for Hoover, who followed his own perverse political passions, dragging federal law enforcement along with him.) 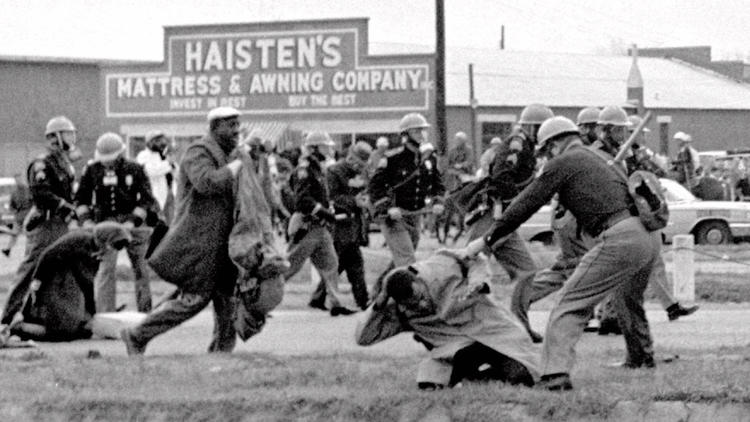 Congressman John Lewis (LA Times), one of those brave young people, a character in the movie, and a hero by any definition, lauds the film as a work of art, more than a historical document.  He describes Johnson as one of the nation’s great presidents, but emphasizes the importance of the people of Selma who took action.  And a film that makes us think about this episode in our past is a good thing; he writes,

And “Selma” does more than bring history to life, it enlightens our understanding of our lives today. It proves the efficacy of nonviolent action and civic engagement, especially when government seems unresponsive. With poignant grace, it demonstrates that Occupy, inconvenient protests and die-ins that disturb our daily routine reflect a legacy of resistance that led many to struggle and die for justice, not centuries ago, but in our lifetimes. It reminds us that the day could be approaching when that price will be required again.

So, we make sense of the past to make the world we want in the future.

And it’s worthwhile to remember that Martin Luther King was hardly as finely polished and broadly accepted as the statue on the mall.  At Vox, Jenee Desmond-Harris hauls out the Poor People’s Campaign, the effort King was organizing when he was killed.  In the last years of his life, Rev. King took his Nobel Prize and his influence on Civil Rights and Voting Rights, and put them all in the service of campaigns against war and against poverty and inequality.  These were brave and less popular efforts, even more radical than the earlier civil rights campaigns.

And, partly because they were less successful than efforts to, say, desegregate buses and libraries, all the more relevant to us today.