Pope Francis’s encyclical on the moral necessity of protecting the 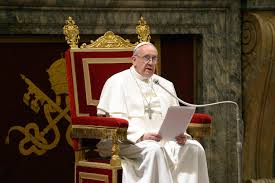 earth is out.  You can read “On Care for Our Common Home” here (in English; translations in many other languages are readily available–but I couldn’t find the Latin version).  The concern about climate change and the recognition of a scientific consensus aren’t new in the Church, but the level of attention and vigor are.

This letter is clear that climate change is a threat to the earth, is caused by human activity, and disproportionately threatens the poorest and most vulnerable.  Although theological doctrine is featured far more heavily than scientific citation, Pope Francis touches on the carbon cycle, recycling, and public transportation, and lauds environmental groups working to promote awareness and policy change.

But the pope says we need more:

209. An awareness of the gravity of today’s cultural and ecological crisis must be translated into new habits. Many people know that our current progress and the mere amassing of things and pleasures are not enough to give meaning and joy to the human heart, yet they feel unable to give up what the market sets before them. In those countries which should be making the greatest changes in consumer habits, young people have a new ecological sensitivity and a generous spirit, and some of them are making admirable efforts to protect the environment. At the same time, they have grown up in a milieu of extreme consumerism and affluence which makes it difficult to develop other habits. We are faced with an educational challenge.

210. Environmental education has broadened its goals. Whereas in the beginning it was mainly centred on scientific information, consciousness-raising and the prevention of environmental risks, it tends now to include a critique of the “myths” of a modernity grounded in a utilitarian mindset (individualism, unlimited progress, competition, consumerism, the unregulated market). It seeks also to restore the various levels of ecological equilibrium, establishing harmony within ourselves, with others, with nature and other living creatures, and with God. Environmental education should facilitate making the leap towards the transcendent which gives ecological ethics its deepest meaning. It needs educators capable of developing an ethics of ecology, and helping people, through effective pedagogy, to grow in solidarity, responsibility and compassionate care.

A papal encyclical is a formal letter stating official positions on theological matters circulated broadly throughout the Church.  It’s circulated broadly to clergy, who then share it with their congregations.  More than 1.2 billion people identify as Roman Catholics–78 million in the United States.  Catholicism is the largest denomination in America.  Adherents include Scott Walker, Marco Rubio, Ted Cruz, Newt Gingrich, Rick Santorum, Jeb Bush.  Not a few of these people have been enthusiastic in bringing their moral and religious values to the practice of politics, at least on a range of other issues.  The Pope has issued a challenge.

This pope is a resource for climate activists, who are already promoting the letter (e.g.), albeit with more concern for science and politics than theology.  Pope Francis is an extremely visible, respected, and well-resourced ally, affording environmentalists a boost in publicity and legitimacy.  The letter is a chance to reiterate arguments they’ve been making for years, and an opportunity to challenge opponents (see above) who profess fealty to the Church and its teachings.

And what about those opponents?  I suspect some discomfort, but only momentary.  They can say–and have said–that Pope Francis (like them) is not a scientist (despite an MS long ago), and that the Church is better on moral issues than scientific ones–explicitly denying the Pope’s claim that the environment is a moral issue.  Really, it’s not politically possible for an aspirant for the Republican presidential nomination to allow his moral concerns to produce a defection from Koch orthodoxy on climate.  Banning abortion or deploring gay sex, however, are other matters.

On religion most Americans pick and choose.

So, liberal activists in the 1980s enthusiastically embraced another pope’s teachings on nuclear weapons and poverty (against both), but mostly passed on abortion and birth control.

Religious authorities are invoked rather selectively by almost everyone in politics.  The overlap between opponents of abortion and opponents of the death penalty, for example, is much smaller than you’d expect if you only read encyclicals.