Don’t stop with the flag. #blackvotesmatter

Politicians in the South, mostly Republicans (because it’s mostly Republicans in power in the South), have been rallying around the removal of the Confederate flag from government display.  South Carolina Governor Nikki Haley called her state legislature into a special session to vote on striking the flag.  Unconstrained by statute, Governor Robert Bentley ordered the Confederate flags removed from the state capitol grounds in Birmingham immediately.  Legislators in Mississippi and Tennessee are working to remove the symbols of the Confederacy.  And Texas just won a case in the Supreme Court to allow it not to stamp the flag on license plates.

Sixty years after the flag was resurrected to symbolize opposition to civil rights, these welcome moves were a long time in coming.  But they’re not too late.

They are, however, too little.

Removing the standard of an army seeking to maintain slavery, and the chosen symbol of a violent racist group, is a good first response to #blacklivesmatter, a small step toward rectifying injustice.  The question is whether these politicians mean to be waving the flag at the end of the campaign, rather than the beginning.

There are many other things to do as well.  Here’s one:

Alabama, Mississippi, South Carolina, Tennessee, and Texas all tightened their Voter Identification requirements, starting in 2011–the reflection of a campaign sponsored by ALEC, the conservative policy shop.  Although there’s a smokescreen of talk about voter fraud, requiring a photo ID to vote has the clear effect of depressing black votes.  Sometimes, less savvy politicians even acknowledge this is the intent: black people are more likely to vote for Democrats. 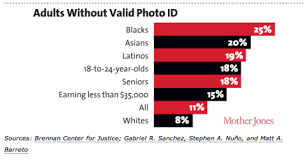 In Alabama and in South Carolina the focus on tighter voter ID came right after Governor Bentley and Governor Haley were sworn into office.

If #blacklivesmatter, #blackvotes should matter too.  Governors Bentley, Haley, and their allies can demonstrate a commitment by making it easier to vote. It’s a clear next step in cleansing their states of a racist heritage.

I’ll bet they won’t do it on their own.  Social movement campaigns need to accept victories relatively gracelessly, and ask for more.  Meaningful access to the ballot has been on the agenda for a long time, and now’s a chance to make something more happen.

There’s nothing wrong with reevaluating names of bridges, schools, and streets named for racist Confederate war heroes, but that shouldn’t become a sideshow or distraction from much more important political work.

And we haven’t even begun to talk about guns….