The new politics of gay marriage, 1.

The battle over marriage equality was never only about marriage. The activists and organizations at the core of movements for and against state recognition of homogamy 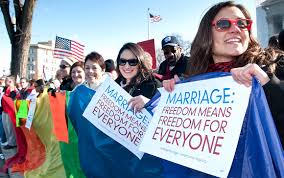 wanted more, much more. In the wake of the Supreme Court’s decision (Obergefell v. Hodges), the questions are all about finding the next political battlegrounds.

Marriage and military service didn’t become the major frontiers for the gay and lesbian rights by consensus, but by effective demonstration. Intentionally or not, the architects of the campaigns for access to two major and fundamentally conservative institutions found a recipe for tapping into conventional values even as they challenged them. Once one side starts to make progress–getting attention, mobilizing support, even winning small victories—their opponents are virtually forced to join the same battle. Positions polarize and harden, and the stance on marriage equality, for example, becomes a litmus test for a host of other values.

The Supreme Court was always the target for the initiators of the movement, and as public opinion shifted dramatically in favor of marriage equality, it became the last line of defense for their opponents.

The Obergefell decision changes everything, although it may take a while for everyone to understand how. An authoritative national decision guaranteeing marriage equality means that all of the groups involved have to figure out what to do next. What do you do when you win?

Evan Wolfson of Freedom to Marry, who has been working this issue for decades, claimed victory and promised to close up shop, announcing that “…the work of this Freedom to Marry campaign is now accomplished. Over the next several months, Freedom to Marry will… strategically wind down its work and document lessons learned, and then close its doors, having achieved its goal of winning marriage nationwide.”

and goals, finding new ways to keep doing some version of what they’ve been doing. This makes sense. For most activists, the marriage campaign was part of a much larger agenda. Second, in pursuit of that agenda, they’ve built organizations and lives that are based around an ongoing battle. There are battles to be fought, Twitter feeds to fill, bills to pay—and, of course, fundraising campaigns to coordinate.
For the winners, groups like Gay and Lesbian Advocates and Defenders (GLAD), Lamda Legal, and the Human Rights Campaign, next steps involve looking at the broader agenda and figuring out the issues that seem most promising or most urgent, those that can hold together the coalitions that supported marriage equality, win political traction, and command activist and funder support. The issues are already there: non-discrimination legislation, protections for transgender people, funding for AIDS education, treatment, and research, and support for youth. Each group will carve out a distinct mix of issues and approaches, and remind supporters that they are continuing the battle.

The challenge is to convince large numbers of people that the new frontiers are as urgent and as promising as marriage became.