The Occupation at Malheur National Wildlife Refuge continues at this writing, and 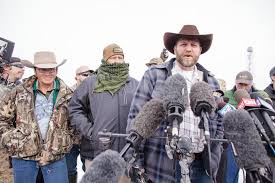 whatever local authorities and the FBI are doing to end the moment isn’t obvious or clear to those of us watching from afar. If there’s a plan, I don’t know what it is.

The Occupiers, however, have a plan, and it apparently comes from God.

At least some of them are operating on His direction.

Like the urban occupations in the fall of 2011 (Occupy Wall Street), the dramatic action has sucked into its wake all sorts of people with all sorts of claims. The New York Times reports finding individuals on site strongly opposed to Jews and/or Islam and/or gays, participants in nativist campaigns, anti-environmentalists, Patriot Militia, and gun rights fundamentalists. (The Anti-Defamation League has published a report detailing the political biographies of the known participants at Malheur, and it’s not a pretty picture: pretty much, it’s the full spectrum of the paranoid right, with a strong cadre of veterans from the Cliven Bundy stand-off last year.)

God may not be supporting all of them.

Although there is much talk from Ammon Bundy about securing the rights of the people to use their land, and to stand up for the Constitution, there’s not much clarity about just

what these Occupiers want, what people they mean to represent, and how they make their own decisions. There has not been strong support locally, from conservative political leaders, or from other believers.

Unlike the hyper-democrats of Occupy Wall Street, the Malheurites haven’t developed a cumbersome, transparent, and largely ineffective way of making decisions. Divine guidance means that you don’t need–and shouldn’t trust–democracy. The lack of visible outside support just means that others don’t get it–or Him.

At Home of the Brave, Scott Carrier has posted a long interview with Brand Thornton, an Occupier who is forthcoming about how he and his colleagues are taking direction from a deity. People who are open to the Spirit recognize when it moves within others, and readily accede to someone who carries God’s word. Thornton reports that the Occupiers have a militarized surveillance and defense system worked out–and, understandably, won’t share many details. He offers somewhat more explanation of the textual support for their campaign on behalf of the people. Their efforts are based in the Constitution (divinely inspired) and scripture from the Doctrines and Covenants of the Church of Latter Day Saints.

Please note that the leadership of the Mormon Church has forcefully and consistently condemned the Occupation. I would NOT call the Occupation an instance of Mormon terrorism, btw.

But opposition from the Church, local residents, or more vigorous readers of the Constitution really doesn’t matter if you feel–if you know–God is with you. With God, democracy isn’t a problem.

But religion and God’s will motivates many activists for all sorts of causes, from Dorothy Day refusing to participate in a civil defense drill in New York City to Eleanor McMullen turning up outside a women’s health clinic to counsel women who might consider abortions–vigorously.

How are we to know who God really supports?

Here’s a clue: since yesterday was Martin Luther King Day, we might recall that King himself was divinely inspired. His check on that inspiration was a steadfast commitment to nonviolence. He was willing to suffer–and die–for his beliefs, but not to kill or threaten others.

At the moment, the Occupiers at Malheur, weapons handy, are demonstrating a little less confidence in the Divine.

5 Responses to God and democracy